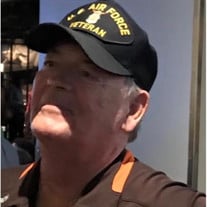 John “Roscoe” Varosky, age 77, of Indian Trail, NC departed this life on April 27th, 2022. John was born June 16th, 1944 in Beaver Falls, Pennsylvania. A graveside service will be held at Sunset Memory Gardens on Tuesday, May 3, 2022 at 2:00pm. After graduating High School he enlisted in the United States Air Force becoming part of the security police. After his service, he began his career in the automotive industry until his retirement. John will always be remembered for the love and compassion he had for his family. He always wanted to be around his family whether it was hanging out with his family, calling the kids, grandkids and great-grandkids as often as he could. John’s family will always remember the Sunday Fundays cooking out and swimming. You could always find him watching and even coaching the kids and grandkids in any activity they wanted to do. He loved watching the Browns and the Indians play any chance he could, he also loved playing golf, Bingo, and watching Nascar. John was an active member at St. Luke’s Catholic Church where he joined the Knights of Columbus. He was preceded in death by his parents, his brother, and son. John is survived by his loving wife Nancy Varosky of 56 years; five children, eleven grandchildren, and twelve great-grandchildren, his brother in Texas, his sister in Texas, brother In-law in Texas, and three sisters’ in-laws in Texas, Massachusetts, and Florida, son-in-law in North Carolina, and an uncle to many. Memorials can be made to the wounded Warrior Project. The family would like to offer the convenience of wearing casual Attire but is not required. The family will receive friends after the Graveside service at Quality inn & suites located at 12047 Guion Ln, Matthews, NC 28105

The family of John Mark Varosky created this Life Tributes page to make it easy to share your memories.

Send flowers to the Varosky family.