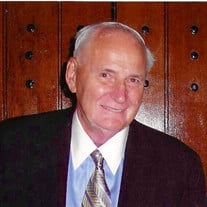 John Henry Wilfert, beloved father, grandfather and great-grandfather, passed away peacefully on June 18 at the age of 97 at Waltonwood Providence. Known by family and friends as Johnny, he was born on October 30, 1923 in Middle Village, Queens, New York , the eldest child of Henry and Bertha Johnson Wilfert. Johnny’s childhood nickname was “Sunny” because of his easygoing and affable personality, two words which would describe him throughout his life. After high school, he enlisted in the Army , and served as a military policeman in Africa and Italy during WWII. Upon his return, he graduated from Wagner College, and spent the majority of his career as an engineer with IBM Corporation in upstate New York, and then Charlotte, retiring in 1990. Johnny met Claire, the love of his life, on a blind date arranged by his brother. They were married in 1954, and had a son, David, and a daughter, Laura. He and Claire often traveled, especially enjoying river cruises, but Johnny was always happiest at home surrounded by family. He loved lying in his hammock, reading in his recliner, tinkering in his workshop, shopping, cooking and baking. He offered to make his signature apple caramel bundt cake for any, and all, occasions. He never met a stranger, and his wife and children would ask him not to prolong errands by speaking to everyone he saw. He was preceded in death by his parents, his brothers Clifford and William, and his wife, Claire. He is survived by his children and their spouses: Laura (Kris) Slesinger, and David (Amy) Wilfert. Johnny also leaves behind five grandchildren, on whom he doted: Kate (Matt) Piselli, Erica (Charlie) Winn, Julia (Ted) Moore, Andrew Slesinger, and Emma Wilfert, as well as three great-grandchildren, Claire Piselli, Daniel Piselli and Henry Moore. There are no words to express our gratitude to the staff in Memory Care at Waltonwood Providence who lovingly cared for “Mr. John” these last three years. They were his family when we could not be, and we will be forever grateful. Honoring Johnny’s wishes there will be no service.

John Henry Wilfert, beloved father, grandfather and great-grandfather, passed away peacefully on June 18 at the age of 97 at Waltonwood Providence. Known by family and friends as Johnny, he was born on October 30, 1923 in Middle Village, Queens,... View Obituary & Service Information

The family of John Henry Wilfert created this Life Tributes page to make it easy to share your memories.

Send flowers to the Wilfert family.