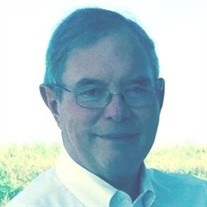 Johnny Watkins, 73, of Charlotte, passed away on May 3, 2021. John was born in Wilmington, NC, to the late Louie W. Watkins and Jean Pridgen Watkins. He graduated from New Hanover High School and continued his education at North Carolina State University, majoring in Industrial Arts Education. In 1977, John received his Bachelor of Architecture from the University of North Carolina at Charlotte. He enjoyed a long career with Wilber, Kendrick, Workman, and Warren Architects and retired from Duke Energy after 25 years. He enjoyed much of his retirement at his Topsail Island home and spending time with family and friends. He also took pleasure in photography, painting, traveling, and volunteering. John is survived by his devoted wife of over 51 years, Sandra S. Watkins. John and Sandra met in a summer school class at NC State University and were married in 1969. He is also survived by his son Benjamin K. Watkins, wife Andi; and daughter Sarah E. Watkins. John is also survived by grandchildren Emma and Zoë Watkins, who lovingly gave him his nickname, “Ba.” Being a dependable and loving father was of the utmost importance to John and his sense of humor brought much joy to his family and friends. In addition to his wife and children, John is survived by his two brothers, Louie W. Watkins and Judson P. Watkins, and their families, of Wilmington, NC. A memorial to celebrate John's life will be held at a later date at Calvary Church in Charlotte. In lieu of flowers, memorial donations may be made to Hospice of Union County (700 W Roosevelt Blvd Monroe, NC 28110) or Children's Home Society of North Carolina (PO Box 14608, Greensboro, NC 27415). Heritage Funeral and Cremation Services is caring for the Watkins family, 3700 Forest Lawn Dr., Matthews, NC, 28104. Online condolences and memorial service information can be found at www.heritagecares.com.

Johnny Watkins, 73, of Charlotte, passed away on May 3, 2021. John was born in Wilmington, NC, to the late Louie W. Watkins and Jean Pridgen Watkins. He graduated from New Hanover High School and continued his education at North Carolina State... View Obituary & Service Information

The family of Johnny Watkins created this Life Tributes page to make it easy to share your memories.

Send flowers to the Watkins family.