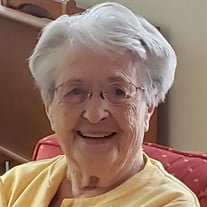 Josephine Wirtel Of Charlotte Mrs. Wirtel, age 99, passed away peacefully on January 27, 2022. A Mass of Christian burial will be held on Wednesday, February 2, 2022 at 1pm at St. John Neumann Catholic Church with Rev. John F. Starczewski, Celebrant. She will be laid to rest at Resurrection Cemetery in Chicago, Illinois. Josephine was born on September 20, 1922 in Chicago, Illinois to the late Anthony and Ann (Wijord) Kudra. She was also preceded in death by her beloved husband Bernard; son, Bernard J. Wirtel; and brothers Casimir and Joseph Kudra. Mrs. Wirtel was beloved by all who knew her. She dedicated her life to her family and took her family heritage of baking and turned it into a career. With no formal training, she baked for Loyola University Medical Center for many years and after she retired, she relocated to Charlotte, NC and joined the breakfast team at Plantation Estates. She is survived by her son, Robert Wirtel (Julie); daughter-in-law, JoAnn Wirtel; grandchildren, Jan Paddon (Nick), Samuel Wirtel (Jana) and Maddie and Ben Wirtel; great-grandchildren, Kali, Addison, Ainsley, Adelle, Jessie, Andrew, Hank, Penny and Bo; and many nieces, nephews and other relatives. In lieu of flowers, please consider offering a Memorial Mass in her memory at your local church. Arrangements are in the care of Heritage Funeral Home, Ballantyne Chapel. Online condolences may be left at www.heritagecares.com

The family of Josephine Kudra Wirtel created this Life Tributes page to make it easy to share your memories.