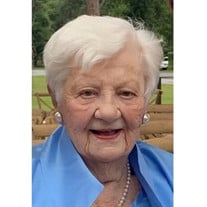 Judith (Jutka) Laszlo Brown died peacefully at her home on November 24th at the age of 95. She was blessed with terrific genes from her parents Geza and Maria Laszlo. Judith was a very proud Hungarian born in Budapest, Hungary on August 7th, 1926. Growing up in Budapest, Judith was fortunate to wake up every morning and look out to the beautiful Danube River. Early in school she had to choose a language to study. Fortunately for her present family, she chose the language none of her friends would choose, English. Judith was never a follower and with this choice her life would never be the same. Along with learning English, in her free time she picked up three additional languages. She often told her children of the beautiful life she had in the country where she was born and raised. But on a Thursday, in April of 1945 all of that changed. At the age of 18, she left the life she loved to find a new life that she would come to love. Her parents and her sister Catherine fled to a refugee camp in Vienna, Austria run by the Americans. By happen stance, she was asked to interpret English for an American Army Captain, who encouraged her to come to Salzburg, Austria to interpret for a new US agency called the O.S.S. (Office of Strategic Services which would later become the CIA). There she met a young agent named Raymond Brown, who for the next fifty-four years of her life produced lots of love, humor and fireworks. They saw the world together from Austria to Italy and even Hong Kong, having their first three children Gloria, Raymond and Michael along the way. Their next stop would have been Istanbul, Turkey in 1959, which was enough to motivate Raymond, a New Englander, to come back to the US. To this day, we are uncertain how the road led them to Charlotte in 1960. That said, Judith was certain Charlotte in the 60’s was not much different than Istanbul. How things changed these last 62 years. Charlotte became her home and she loved everything about it, especially its people. Charlotte is also where her baby girl, Leslie, was born, 15 years after Gloria, her first. Mom was an avid reader but would never read a book on how to raise children. Her children would guess that chasing one of them with a golf club or throwing a salad bowl at dinner probably would not have been in any of the chapters. Obviously, her method of raising children was unconventional, but her children absolutely adored her. Even in her 80’s and 90’s, her grandchildren loved dropping by to visit. She had the “it” factor and they wanted to be around her. She was described by one of her grandchildren as the “coolest woman she ever met.” How blessed they were to have a matriarch like Grammie in their lives. We all knew that Mom was a good competitive bridge player, but she never talked about it. Her friends from bridge were such an important part of her life. They were the ones that shared with us that she was a Platinum Life Master, which “is a level many people can only aspire to reach.” She accomplished much in bridge, but what amazed her family was during COVID and at the age 94, she learned to play bridge online. She continued playing to the very end. There are so many adjectives to describe our mother, but the one that rings the loudest is her resiliency. From the time as a young girl when her life was turned upside down and throughout the 19 years without Dad, she showed us all how to live. Unlike her beautiful garden that is turning over for another season, her memory will live on through all those she touched. She was preceded in death by her husband Raymond Brown, and survived by her sister Catherine MacKay, her children Gloria Rockwell (Dennis), Raymond Brown (MaryAnn), Michael Brown (Tammie), Leslie Elmore (Dan), her Grandchildren Jeffery, Katie, Carol, Raymond, Hayes, Ansley, Mason and Bridget and her great grandchildren, Justus, Nora, Henry, Georgie, and Ford. The family would like to thank Carolyn Reeder and Cerita Lindos for their loving care and friendship to our mom. A Mass of Christian Burial will be celebrated on Friday, December 10th, 11 AM at St. Gabriel’s Catholic Church. For those not able to attend, the Mass will be livestreamed and can be accessed through the churches website at https://stgabrielchurch.org/livestream. The family will receive friends and guests at a reception following the service, location to be announced. In lieu of flowers, memorials contributions may be made to the American Heart Association or Good Friends of Charlotte.

Judith (Jutka) Laszlo Brown died peacefully at her home on November 24th at the age of 95. She was blessed with terrific genes from her parents Geza and Maria Laszlo. Judith was a very proud Hungarian born in Budapest, Hungary on August 7th,... View Obituary & Service Information

The family of Judith Brown created this Life Tributes page to make it easy to share your memories.

Send flowers to the Brown family.