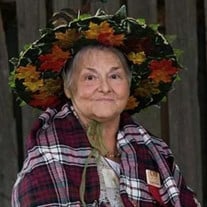 Judith Hutchinson, 83, also known as “Grammie”, passed peacefully in her sleep on Tuesday, February 22, 2022. She is survived by her loving children; Heather (Scott) Rimmer, Holly Hutchinson (Jeff Maner), Helene Bergeman, and Jeffrey Hutchinson; her five grandchildren; Autumn Rimmer, Adam Sturgill, Sarah Sturgill, Hannah Rimmer, and Grant Bergeman; and one great-grandchild; Blakely Sturgill. Judith was an only child, the daughter of Col. Louis H. and Edna Shirley, who preceded her in death, as well as her husband, Henry Hutchinson. She spent the first part of her life travelling the world with the US military, attending HS in Germany and residing for many years in Okinawa, Japan. Her occupation could be listed as “free spirit”. Judith loved saltwater taffy, trashy romance novels, Yoda, spaghetti, and hedgehogs. She was a hopeless romantic who effortlessly saw the good and love in all people. Judith was a character, to put it lightly. Judith to her friends and church family, Mom to her children, Grammie to her grandchildren and many others, and Mother Nature to the patrons of the faire. Her alter ego was Mother Nature, of which she faithfully performed for 15 years at the Carolina Renaissance Festival. Double lives tend to bleed into one another, as her faire terminology seeped into her day-to-day. “Huzzah!” was part of her common tongue. She was also known as everybody’s best friend. A trusted adviser (with anything: a funny story, a heavy story, any and everything life has to offer), a listener (a confidante of the ages), and an ally. She had a special place in her heart for special people, even attending college for special education early in her life. She spent her free time as a volunteer at her home church (Elevation Matthews) and at the Matthews Help Center. To those who knew her always saw her with her faithful companion Jeffrey, by her side. Their presence could be compared to peanut butter and jelly, shrimp and grits, mashed potatoes and gravy, Grammie and Jeffrey. When hearing of her passing, Jeffrey said “that’s okay. Momma’s doin’ the river dance now”. While she didn’t get around very well, she had the unique distinction of being part cyborg, with many of her bones replaced or enhanced with titanium. And in recent years, she was even upgraded to Bluetooth compatibility. Always updating with the times. She loved being her own self. Gentle in her rebellion, but rebellious, nonetheless. Even after the umpteenth time explaining the LOL meant “laugh out loud” in text speak, she claimed it means “lots of love”. And every text was signed “lol mom”, which always seemed just a little bit cheeky, given whatever the subject. “Oh I’m sorry you had a bad day. Lol mom” Judith was a super cool lady, a loving mother, grandmother and friend. She will be truly missed, but her aura will shine on. The mark she left on this planet will not be soon forgotten. Even Mother Nature manifested her death on the last palindrome of the foreseeable future. A private service will be held with her family on Saturday February 26th. A wake is planned to celebrate her on March the 12th. Final details to be confirmed. In lieu of flowers, Mother Nature requests donations be made in her honor to Matthews Help Center, Special Olympics, or the ARC of NC.

The family of Judith Ann Hutchinson created this Life Tributes page to make it easy to share your memories.

Send flowers to the Hutchinson family.