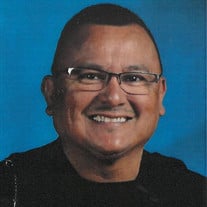 Officer Julio Cesar Herrera, Jr., 54, of Waxhaw, NC, passed away on Monday, October 4, 2021. Julio was born on January 31, 1967, and grew up in Frederick, Maryland. He graduated from Belmont Abbey College where he played soccer for 4 years and was a member of Sigma Phi Epsilon. After college, having a great passion for mentoring youth, he worked at Thompson Children’s Home and the Boys and Girls Clubs of America. Following in his father’s footsteps, Julio joined the Charlotte Mecklenburg Police Department in 1993 and served the citizens of Mecklenburg County and the City of Charlotte faithfully since as a patrol officer. Julio then added the role of School Resource Officer to his duties in 1996 and was assigned to Providence High School. He was then assigned as the School Resource Officer at the new Ardrey Kell High School in 2006 where Julio was beloved by the staff and students. He also worked with many different CMPD Youth Programs during the summer where Julio was a great role model for many youth. Julio gave his all in everything he did receiving many awards during his career; two-time recipient of the Charlotte Mecklenburg Police School Resource Officer of the Year, Lifesaving Award, 32nd Annual Charlotte Mecklenburg Police Community Relations Award and the Crime Stoppers Award. Through the years, in his spare time, Julio coached soccer at the little league, middle school, high school and collegiate level. He also coached soccer at Providence High School where they went on to win the NCHSAA 4A State Championship in 2000. Julio loved spending time with his wife and two sons, who were his pride and joy. He is survived by his beloved wife Beth Herrera; sons Jordan Herrera and Christian Herrera; parents Jim and Lynda Geary; brothers Jamie Geary (Beth) and Bobby Geary (Candy); sister Alia Roberts (Thomas); foster siblings Nancy Ledford (Josh), Steven Vongchanh, Michael Patterson and many other foster brothers and sisters that he loved dearly; uncle Dan Geary; numerous cousins, nieces and nephews; his Charlotte Mecklenburg Police Department Family; and by all the faculty and students he worked with over the years. Officer Herrera will be remembered as a humble, caring officer, who gave so much of himself to ensure the safety and well being of those entrusted to his care. He always had a smile on his face, and always gave an encouraging word. His passing will leave a tremendous void with his family, friends, fellow officers, faculty, students, and the community. Services in celebration of Julio’s life will be held on Monday, October 11, 2021, at 10:00 AM at First Baptist Church of Charlotte, 301 South Davidson Street, Charlotte, NC 28202. Flowers are welcome as well as donations to PAL at https://www.palcharlotte.org/. PAL held a special place in Julio's heart as he would spend summers when school was not in session and he would appreciate donations to help the kids that benefit from PAL. Arrangements are in the care of Heritage Funeral Home, Weddington Chapel. Please visit www.heritagecares.com to leave the family online condolences.

Officer Julio Cesar Herrera, Jr., 54, of Waxhaw, NC, passed away on Monday, October 4, 2021. Julio was born on January 31, 1967, and grew up in Frederick, Maryland. He graduated from Belmont Abbey College where he played soccer for 4 years... View Obituary & Service Information

The family of Officer Julio Cesar Herrera Jr. created this Life Tributes page to make it easy to share your memories.

Send flowers to the Herrera family.