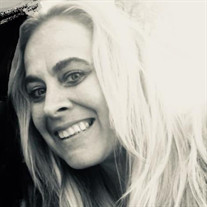 Katherine Hoyle Golden of Ft. Mill, SC Mrs. Golden, 51, unexpectedly passed away on August 16, 2021. The family will receive family and friends on Friday, August 27th from 10-11am at Carmel Presbyterian Church with her funeral service beginning at 11am. Burial will be private at Rosehill Memorial Park in Fallston, NC. Katherine was born June 6, 1970 in Charlotte, NC and grew up the middle child between her older brother, Stephen Hoyle Jr. (late) and her younger brother Terry Hoyle. She married Charles Golden in 2005 and became the mother of Maddox, 14, and Connor, 11. She was a dedicated homemaker and loved taking care of people. She was a very generous person with a great passion for animals, especially horses, the beach, cooking and family, although she loved nothing more than God and being a mom. She enjoyed going to Church, helping others and volunteering at her sons’ school. She is survived by her beloved husband of 16 years, Charles Golden of the home; son, Maddox Golden of the home; son, Connor Golden of the home; mother, Lynn Logan Hoyle of Charlotte, N.C.; brother, Terry Hoyle of Wilmington, N.C; nieces, Crysta Hoyle, Rylie Hoyle, Shelby Miller, Addy Miller, Hadley Miller and Katelyn Gray; nephews, Jackson Hoyle and Darien DeLay; great-niece, Alaina Gordon; Sisters-In-Laws, Diana Hoyle and Missy Hoyle and her two dogs, Zeus and Bentley of the home. Katherine was preceded in death by her father, Stephen Hoyle and her brother, Stephen Hoyle JR. In lieu of flowers, accounts have been set up for her children’s future education fund. You can donate at https://gofund.me/2f30a369. Arrangements are in the care of Heritage Funeral Home, Ballantyne Chapel. Online condolences may be left at www.heritagecares.com

Katherine Hoyle Golden of Ft. Mill, SC Mrs. Golden, 51, unexpectedly passed away on August 16, 2021. The family will receive family and friends on Friday, August 27th from 10-11am at Carmel Presbyterian Church with her funeral service beginning... View Obituary & Service Information

The family of Katherine Hoyle Golden created this Life Tributes page to make it easy to share your memories.