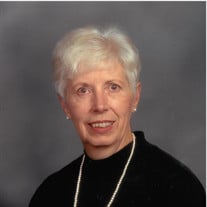 Kathryn “Kathy” Churilla, 80, passed away, surrounded by her loved ones, on February 11, 2022. A Mass of Christian Burial will be held at 12pm on Monday, February 28, 2022 at Our Lady of Grace with Father Kirby Celebrant. Burial will be private. Mrs. Churilla was born May 26, 1941 in Ft. Smith, AR. She was a graduate of St. Mary’s Commercial H.S. in Detroit, MI. She was an excellent stenographer and with her talent, she held numerous Federal Jobs which included the U.S. Tank Command, USA Air Force Academy where she was the admin for the base Surgeon General. She was a co-owner and buyer for The Stuffed Safari stores in Michigan and Colorado. She enjoyed gardening, puzzles, golf and reading. She was instrumental in bringing authors to the Del Webb Library. Kathy, beloved wife, mother and grandmother, dedicated her life to her family. Kathy is survived by her beloved husband of 59 years, Thomas “Tom” Churilla; children, Constance Ferguson (Robert), Nancy May (Michael) and Janet Carter (Charles); siblings, Jack Flaig (Mary Ann), Robert Flaig (Kim) and Muriel Harris; grandchildren, Kaitlyn Ferguson, DVM (fiancé Joseph Sciurba, DVM), Corey Ferguson, Landon May and Rylee Carter. Kathy was preceded in death by her parents John and Muriel Flaig and an infant son, Joseph Churilla. In lieu of flowers, donations may be sent to Friends of the Del Webb Library, 7641 Charlotte Hwy, Indian Land, SC 29707 memo: In Memory of Kathy Churilla. Arrangements are in the care of Heritage Funeral Home, Ballantyne Chapel. Online condolences may be left at www.heritagecares.com

The family of Kathryn Marie Churilla created this Life Tributes page to make it easy to share your memories.

Kathryn “Kathy” Churilla, 80, passed away, surrounded by her...