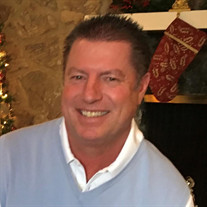 Lee Stanley “Stan” Becton Jr., 57, of Charlotte, NC, passed away peacefully at his home on Friday, July 16thsurrounded by his loving family. Stan was born March 17, 1964, in Kinston, NC, to Lee Becton Sr. and the late Linda Becton. He is survived by his loving wife Eyvonne Becton, his father Lee Becton Sr. (Newland, NC), his sister Susan Becton (Myrtle Beach, SC), a daughter, Molly Jimison(Rutherfordton, NC), a grandson, Nolan Serrano (Rutherfordton, NC), a god-daughter, Sejal Dhiman (Charlotte, NC), and many close friends. Stan was a life-long UNC Tar Heel fan, and he graduated from the University of North Carolina at Chapel Hill in 1986 with a BA in Health & Physical Education. He loved all sports and competition as a child growing up in Wilkesboro, but golf quickly became his passion after graduating from Chapel Hill. He was an extremely active member for nearly two decades at Raintree Country Club in Charlotte, NC. He served on numerous committees at Raintree CC and held a significant tenure as President of the Men’s Golf Association, which he considered his pride and joy. Stan won a number of club tournaments and participated in the 48th North Carolina Amateur Championship at Raleigh Country Club in 2008.If his puttingstroke was just a bit better, he would have won numerous other tournaments. A Memorial Service will be held on Saturday, August 14at Raintree Country Club in Charlotte. In lieu of flowers, the Family suggests contributions to The Levine Cancer Instituteof Charlotte or the First Tee of Charlotte. Family is in the care of Heritage Funeral Home, Weddington Chapel. Online condolences can be made at www.heritagecares.com.

The family of Lee Stanley "Stan" Becton, Jr. created this Life Tributes page to make it easy to share your memories.