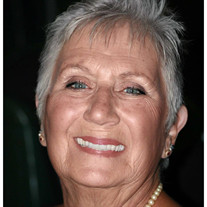 Lorraine Amadeo Wilner, 79, passed away peacefully on April 25, 2022, surrounded by loving family at her home in Lancaster, S.C. Born in Brooklyn, New York, Lorraine grew up roller skating down Cabrini Boulevard with her siblings. She later moved to Queens, graduated from The Mary Louis Academy and stayed to raise her children. Lorraine was a determined, loyal and loving person who could light up a room with her witty humor and bright smile; between her knack for languages and personality she transcended borders - allowing her to excel at Shiseido Cosmetics for over 20 years. She spent a number of years as the Director of Training, sending her on trips to Japan, Singapore, Holland, France and more. Lorraine met the love of her life and forever travel partner, Bob, marrying in 1991. After living in New York for six decades, most recently in the Sunnyside neighborhood of Queens, they moved to Estero, Florida full-time and adopted Honda, the family dog. The couple was well known for their love of art, spending time at local art shows and in beautiful museums around the world. After moving to South Carolina in 2016, Lorraine enrolled in painting and foreign language classes at the University of South Carolina Lancaster, where she made the Honor Roll and Dean’s List multiple times. She painted numerous pieces for her family and friends across the country, and her work was displayed in local art galleries. Never one to remain idle, Lorraine also volunteered at a local animal shelter. Later she adopted Maci, a Honda mini-me. Lorraine is survived by her siblings Edith, Vincent (Karen) and Jack; children, Scott, Lorraine (John) and Craig (Shirley); step-daughter Jody (Terry); grandchildren Duncan and Alia, Jane (Ben) and Billy (Cat), Rachel and Casey, Zach, Danny (Leah) and Genny; great-granddaughter Jacqueline; many loving nieces, nephews, friends and an amazing group of neighbors. She was preceded in death by her husband, Bob; older sister, Laura; son Brett; and step-daughter Stephanie. In lieu of flowers, please send a donation to Little Wishes (www.LittleWishes.org) in memory of Lorraine.

Lorraine Amadeo Wilner, 79, passed away peacefully on April 25, 2022, surrounded by loving family at her home in Lancaster, S.C. Born in Brooklyn, New York, Lorraine grew up roller skating down Cabrini Boulevard with her siblings. She later... View Obituary & Service Information

The family of Lorraine Amadeo Wilner created this Life Tributes page to make it easy to share your memories.