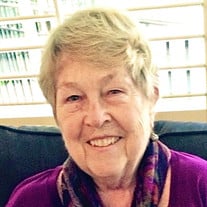 Live Stream will be available beginning at 12:20 p.m. --- click on the icon under videos on the obituary page. Marcia Lynne Pfeuffer Hutchins passed away peacefully at home surrounded by family on August 21, 2021. Marcia was born on October 13, 1940 in Saginaw, Michigan. She went by many names; Mother, Mom, Momma and her favorite, Muffy, which is used not only by grandchildren but adults and in-laws as well. She was the eldest daughter of Arthur Max Pfeuffer and Alice Gertrude White Pfeuffer. She graduated from Arthur Hill High School in Saginaw and attended Alma College where she met her husband to be, Kenneth Hutchins. They married in 1960 while he was a student at the University of Michigan Medical School. She worked at the university until eventually becoming a full time mother to eight children. After Ken graduated, they became a Navy family and spent ten years moving around the country from duty station to duty station. These were challenging times but she never complained and was always a wonderful mother and devoted wife. In 1972 Ken left the service and the family moved to Charlotte. She loved her family more than anything in the world. She was a kind and generous person never missing a birthday or any opportunity to celebrate someone. She was always willing to volunteer her time even hosting two foreign exchange students. She was very creative involving herself in many craft and art endeavors over the years. After the kids graduated college, she and Ken had a few good years to enjoy traveling and doing many of the things that had been put on the back burner. Those years were cut short by health issues and during her last few years she was homebound. She was pre-deceased by her maternal grandparents Ray and Gertrude White, paternal grandparents Robert and Frieda Pfeuffer and her parents Arthur Max and Alice Gertrude Pfeuffer, all of Saginaw Michigan. She was also pre-deceased by a younger sister Debby. She is survived by twin brothers, Richard Pfeuffer (Terri) of Mint Hill, Randall Pfeuffer of Fort Collins, CO, Thomas Pfeuffer (Lisa) of Mint Hill, NC and sister Peggy Jo Meddaugh (Willis) of Saginaw MI. She is also survived by her eight children Heidi Nichols (David) of Weddington, NC, Kelly Hutchins (Jim Kelley) of Hilton Head, SC, Kristin Hutchins (Bob Cwikla) of Cary, NC, Kip Hutchins of Carrboro, NC, Scott Hutchins (Christene) of Waxhaw, NC, Eric Hutchins of Charlotte, NC, Becky McManus (Mark) of Houma, LA, and Brett Hutchins of Huntersville, NC. Grandchildren include Kelsey Nichols Drozd (Michael) of San Diego, CA, Ashton Nichols of Charlotte, NC, Sean Kelley of Charlotte, NC, Kaitlin Cwikla Hobbes (Joe) of Johnson City, TN, Courtney Cwikla of Holly Springs, NC, Matthew Cwikla of Cary NC, Quintin Hutchins of Charlotte, NC, Jacob McManus, Benson McManus, and Will McManus all of Houma, LA, Houston Hutchins, Hayden Hutchins, and Harris Hutchins all of Huntersville, NC. Great-grandchildren, Brynley, Avalyn, and Lillian Grace Drozd of San Diego, CA. Marcia will be greatly missed by all who were blessed to have known her. In lieu of flowers, donations may be made to Hospice and Palliative Care, Charlotte Region, 7845 Little Avenue, Charlotte, NC 28226 or Sardis Presbyterian Church, 6100 Sardis Road, Charlotte, NC 28270.

Live Stream will be available beginning at 12:20 p.m. --- click on the icon under videos on the obituary page. Marcia Lynne Pfeuffer Hutchins passed away peacefully at home surrounded by family on August 21, 2021. Marcia was born on October... View Obituary & Service Information

The family of Marcia Lynne Pfeuffer Hutchins created this Life Tributes page to make it easy to share your memories.