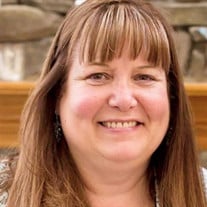 Marianne Lorraine (Weber) Johnson, 62, of Matthews, NC passed away on Thursday, October 14, 2021 at Harris Hospice located in Charlotte, NC after a long illness. Marianne was born on July 12, 1959, in the Bronx, NY as the daughter of Florence (Watrell) Weber and the late Arthur Weber. She married Leslie (Les) Johnson on June 24, 1989 in Glen Cove, NY and moved to Matthews, NC in 2004, where they were happily married for 32 years. Marianne is also the proud mother of three daughters, Victoria Adriatico (married to Nicholas Adriatico), Hallie Johnson and Sabrina Johnson, as well as a “fur mother” to her sweet dog Tootie. In addition, Marianne was a loyal big sister to her younger sister Virginia Arvidsson (married to Danny Arvidsson) and brother Artie Weber. Marianne graduated from S.U.N.Y Cortland with a Bachelor’s Degree in Health Education in 1981 and received her Masters Degree from Stony Brook University in Human Development in 1987. Marianne worked in University Housing Administration, where she held various leadership roles and assisted thousands of students during their college careers. After her years in Higher Education, she worked for various companies and businesses in the New York/New Jersey area before taking on her most important (and best) role as a stay-at-home mother. In addition to being there for her own children, Marianne also supported other children through substitute teaching, serving as “Room Mother” and volunteering for various events. In her personal time, Marianne enjoyed decorating, gardening and maintaining a beautiful home for her family to enjoy and grow in. She also loved capturing memories of her loved ones and nature through photography. Hand in hand with this skill, Marianne had a passion for scrapbooking, or the art of taking photos and transforming them into beautiful pieces to commemorate memories. Classic movies and traveling to new places were other interests of hers, but most of all her passion was for motherhood. Her children always came first of her own needs, which lead to her advocacy for the betterment of education, specifically in the Charlotte Mecklenburg School District her daughters were a part of. Marianne will be honored with love on Sunday, October 17th at Heritage Funeral Home in Matthews, NC. Visitation will begin at 1:00pm prior to the service immediately following at the funeral home. Memorial donations may be made in Marianne’s name to the American Cancer Society to help support those still pursuing a resolution to their illness.

Marianne Lorraine (Weber) Johnson, 62, of Matthews, NC passed away on Thursday, October 14, 2021 at Harris Hospice located in Charlotte, NC after a long illness. Marianne was born on July 12, 1959, in the Bronx, NY as the daughter of Florence... View Obituary & Service Information

The family of Marianne Lorraine Johnson created this Life Tributes page to make it easy to share your memories.

Send flowers to the Johnson family.