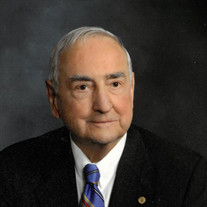 Dr. Martin John Kreshon, Sr., “Doc Doc” died June 20, 2021 on Father’s Day, at home surrounded by his loving family. Martin was born in Beaver Falls, PA on November 11, 1929, the son of the late James and Elizabeth Kreshon. He is preceded in death by his loving wife of 52 years, Yolanda Mae Jerome (Jerri), his sister, RoseMarie Keeler, and many Aunts, Uncles and Cousins. Martin was born during the depression and remembers the struggles his family and others went through during those times. As a boy, he would sing on the street corner near the bus stop hoping the workers would throw him pennies to help his family. Always a hard worker, he put himself through school, and always felt getting an education was the key to success. He graduated from Geneva College in three years with honors and applied to medical school at Marquette University. Once he was accepted, he came back to Beaver Falls to marry his sweetheart, Jerri. Martin graduated from Marquette and did his Internship in Erie PA. After Erie, he joined the army, and worked as a general physician for two years. During his time there he realized that he wanted to specialize in eyes. He was accepted to Duke University and studied Opthalmology. He established a longstanding fellowship at Duke. Once he graduated from Duke he was invited to a partnership at The Eye, Ear, Nose and Throat Hospital in Charlotte, NC. The EENT hospital has grown to over 100 doctors throughout the Charlotte region. Many of his patients still ask about him and tell stories about how he saved their eyesight. He was president of the American Academy of Opthalmology in the early 70’s and wrote many chapters in Medical journals on Opthalmology. His accomplishments are many: Doctor, Fellow, Husband, Father, and Son. Martin and Jerri were very involved with Charitable Works throughout their lives. After Jerri died of Melanoma, Martin started the Melanoma golf Tournament through Carolinas Healthcare Foundation raising over one million dollars for Melanoma Research. Survivors include, his brother James Kreshon (Connie); his children: Kathy Carver (Danny), Susan Boynton (Mark), Karol Ann Kreshon (Mark), Martin John Kreshon, Jr. (Kathy), Amelia McMaster (Britt) , Michael Kreshon (Delaine), Elizabeth Kreshon, and John Edward Kreshon (Kelly). Martin is also survived by his grandchildren: Richard, Andrew and Robert MacKelfresh, Angela Carver Martin, Steve Boynton and Christie Hansen, Benjamin, Alexander and Cecilia Radmard, Mary Sewell, Sarah Owens, Christine Hinds and Martin John Kreshon III, John Simms and Creighton McMaster, Caitlin and Carmen Kreshon, John and Elizabeth Kreshon; and 23 great grandchildren. A Mass of Christian Burial will be held at St. Gabriel’s Catholic Church on Thursday, June 24, 2021 at 11:00 am with visitation one hour prior. St. Gabriel will have the service live streamed on the Church's website at Public Link: https://boxcast.tv/view/funeral-for-martin-john-kreshon-879978 This can also be viewed on the Church website at: https://stgabrielchurch.org/livefunerals Start time: Thursday June 24th at 10:55am Memorial donations can be made to the Carolinas Melanoma and Immunotherapy Fund at Atrium Health Foundation at www.AtriumHealthFoundation.org/tribute or 208 East Blvd., Charlotte, NC 28203. Arrangements are in the care of Heritage Funeral Home, Weddington Chapel. An online guestbook is available at www.heritagecares.com.

The family of Dr. Martin J. Kreshon Sr. created this Life Tributes page to make it easy to share your memories.

Send flowers to the Kreshon family.