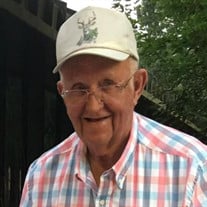 Marvin W. Harper, 78 years old, of Matthews, NC passed away peacefully at home Saturday, October 2, 2021 surrounded by his devoted and loving family. Marvin enjoyed playing sports growing up which included basketball and football at Charles D. Owen High School in Black Mountain, NC. Although he was a humble athlete, many remember him as a star 1962 quarterback! He also enjoyed serving as umpire at many youth baseball games played at the Beacon Village Youth Field. He worked for several years as a Service Expediter at Kearfott Corporation in Black Mountain, NC and in maintenance at Beacon Manufacturing in Swannanoa, NC. However, he spent the majority of his career with his second family of 40+ years, Weeks-Williams-Devore Incorporated in Matthews, NC where he was a Service Representative. He was a loyal and dedicated employee that cared and enjoyed servicing industrial and commercial boilers for their many customers. During his career there, he traveled all across the United States and to Scotland, Ireland, Puerto Rico, Mexico and Nicaragua servicing boilers for manufacturing plants, hospitals, prisons, you name it…he did it. Before retirement, Marvin had the honor and privilege of training his youngest son, Chris, to be his replacement. They traveled many miles together, meeting with customers and servicing equipment side-by-side. He trained him so well, that now, Chris owns his own boiler company, Lewis Boiler in Greensboro, NC. Although Marvin officially retired in 2008, he continued to work at Weeks-Williams-Devore on an “as needed” basis for many years afterward. Marvin also served in the Stallings Volunteer Fire Department for approximately 10 years along with both of his sons. He enjoyed the people, it’s purpose and helping with BBQ’s and other special events as well. Marvin married his lovely bride, Marian E. Lyda (Mimi), on his 20th birthday! In November Mimi plans to celebrate their 59th wedding anniversary and his birthday remembering the many days that he was able to enjoy doing his favorite things – listening to gospel music (Marvin knew the words to every song), fishing, word searches, playing solitaire, talking on the phone with friends and savoring his 3 cups of coffee every morning. His favorite above all though, was spending time with family, especially his grandchildren and great-grandchildren. He spent the past few months helping his oldest son Ricky tend and care for his farm in Oakboro, NC. Marvin’s job on the farm was to check and fill the cows’ water - he did it so well that he was promoted many times. Also, while on the farm he thoroughly enjoyed watching for deer, wild turkeys and anything that moved! He leaves behind a beautiful legacy and one that he was so very proud of – in addition to his wife, Marian (Matthews, NC) he is survived by his two sons, Ricky and wife, Kathy (Oakboro, NC), Chris and wife, Marie (Reidsville, NC); three granddaughters Morgan Anderson and husband, Colton Anderson, Sydney Jackson and husband Isaac Jackson, and Jenna Harper; three great-grandsons Caden Harper, Camden Anderson and Easton Jackson. Marvin was also dearly loved by his sister-in-law, Becky (Harper) Buchanan as well as his nieces Vickie Bradley, Kim Hensley and Kayson Fulbright, nephew Keith Wilson and their families and many great nieces and nephews. He was preceded in death by his parents, Jesse and Sally Harper and his two brothers, Troy and Sam Harper, sister and brother-in-law Gail and Ronald Wilson. Marvin was quick witted and always had something positive or funny to say, so we would like to share some of our most favorite (but not all) Marvin-isms: - Walk slow and drink plenty of ice water. - Everything is going to be all right. - My name is Jimmie…I’ll take what you gimmie. - Hot Dog! - If she likes it, then I love it. - Well hoot my tooter. - Whatever the boss says. - Is fat meat greasy? - How do I feel? With my fingers. And finally, he would end every conversation and meeting with…. I’m glad you got to see me. Due to the rise in COVID the family has decided to postpone a Celebration of Life until Spring 2022.

The family of Marvin William Harper created this Life Tributes page to make it easy to share your memories.

Send flowers to the Harper family.