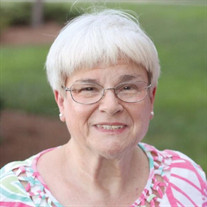 Mary Ellen McDevitt (75) was born Mary Ellen Burkholder in Allentown, PA on August 28, 1945. She graduated from Allen High School and then from St. Luke’s Hospital School of Nursing. Because she’d always loved children, she chose to specialize in Pediatrics. She worked at St. Luke’s Hospital and then went to Wilkes College and Cedar Crest College from which she graduated with a B.S. in Nursing. After graduation she continued to work as an RN at St. Luke’s. After marrying, she and her husband Charlie honeymooned in Ireland, Scotland and England before building their dream home, a ranch-style house in Schnecksville, PA near the Trexler Nature Preserve. They later relocated to Northern Virginia where she worked for 17.5 years as aclinic school aide, often being the one person in the school all the kids clamored to see. Nurse Mary was beloved. Upon retirement in 2006, she and her husband moved to Matthews, NC to be closer to their son John and his growing family and to spend time with the grandchildren. She was a phenomenal Grandma to Sean, Chris, and Nick, always attending their activities and sports, having sleepovers, baking seemingly endless muffins and sweets, and never tiring of playing games on family Sundays. Mary was an active member of the Mathews Presbyterian Church where she proudly served as an Elder for three years and as the Chair of the Fellowship Committee for two years. She formed many close friendships with her church family. She also loved to share joy with the congregation by cooking and baking for various activities. Mary was a people person. She loved to play bridge with her friends at the Levine Senior Center as often as she could. Despite relocating after retirement, she also remained close with many people whose friendships spanned well over fifty years. Her love also included a large extended family here in North Carolina with whom she spent many holidays and special occasions. Mary lost a valiant battle with cancer of the peritoneum on August 26, 2021. She was preceded in death by her parents John and Susanne Burkholder and her beloved aunt Mary Kriebel. She is survived by her sister Janet, her aunt Ginny, her husband of 53 years Charles, their sons John and Doug, her daughters-in-law Amanda and Lisa, and three grandsons: Sean, Chris and Nick. She was a family treasure, never to be forgotten. Heritage Funeral Home is serving the family. She will be cremated and interred in a graveside burial ceremony in Forest Lawn East Cemetery in Matthews, NC at 11:00 a.m. on September 11, 2021. In lieu of flowers, donations in her memory can be made to Matthews Presbyterian Church, P.O. Box 97, Matthews, NC 28106.

The family of Mary Ellen McDevitt created this Life Tributes page to make it easy to share your memories.

Send flowers to the McDevitt family.