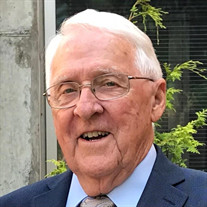 Maurice Alexander Foltz, 86, passed away peacefully on June 15th, 2021, in Monroe, North Carolina. Maurice was born in 1935 to Rev. Howard Gilbert Foltz and Alta Mendenhall Foltz in Winston-Salem, NC. He grew up in Winston-Salem and Eden, where he was a member of the Moravian Church. He is survived by his children, Patricia F. Hubbard (John), Monroe, NC, Kimberly F. Johnson (Kevin), Hillsborough, NC, his grandchildren, Paul A. Johnson (Maggie), Washington D.C., H. Cole Hubbard (Carmen), Rockwell, TX, and Hannah M. Johnson, New York, NY, his siblings, Herbert A. Foltz (Evelyn), Jacksonville, FL, and Ila F. Parker, Williamston, NC. He is predeceased by his wife Julia, his parents, Howard and Alta, and his brother and sister-in-law, Ted and Martha of Jacksonville, FL, and his brother-in-law, Burke Parker of Williamston, NC. After graduating Catawba College in 1957, he served in the US Navy for two years. He then began a long career in finance and business. After retirement, Maurice enjoyed working part-time for Stone Theatres right up until his passing due the the many friends he made there. He also spent many hours tending to his garden. The joy of Maurice’s life was his marriage to the late Julia Martin Foltz. They shared 56 years together before her passing in 2011. Later in life, Maurice met Myrtle Blackmon (Pageland, SC) and her family. Myrtle became his close companion and brought much joy to his final years. In lieu of flowers, please send donations to: Hospice of Union County In memory of Maurice Foltz 700 W. Roosevelt Blvd. Monroe, NC 28110. Family is in the care of Heritage Funeral Home, Weddington Chapel. The family is grateful to the Hospice of Union County for their kind and loving care during his final days.

Maurice Alexander Foltz, 86, passed away peacefully on June 15th, 2021, in Monroe, North Carolina. Maurice was born in 1935 to Rev. Howard Gilbert Foltz and Alta Mendenhall Foltz in Winston-Salem, NC. He grew up in Winston-Salem and Eden,... View Obituary & Service Information

The family of Maurice Alexander Foltz created this Life Tributes page to make it easy to share your memories.

Send flowers to the Foltz family.