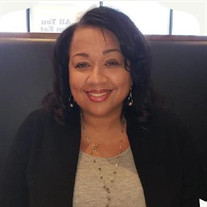 Michelle Breland was a bright light that came into the world on October 6, 1962, at 11:30pm. Her special gift was to illuminate, to bring clarity about what was possible for each person whose life she touched. She could always see in others... View Obituary & Service Information

The family of Michelle Breland-Jude created this Life Tributes page to make it easy to share your memories.

Michelle Breland was a bright light that came into the world...

Send flowers to the Breland-Jude family.