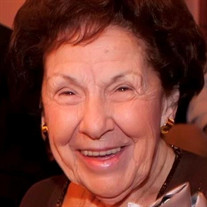 Mildred Helen Noethiger, age 97, of Charlotte, NC passed away on July 29, 2021. Mildred was born on November 27, 1923 in Kings County, NY to the late Benjamin and Margaret Compton Choules. She was preceded in death by her beloved husband of 62 years, Howard G. Noethiger, brothers Benjamin Jr. and George, and sisters Gertrude and Norma. From a very early age growing up in Brooklyn, Mildred always showed much love, compassion, and care for others, qualities she would exhibit throughout her entire life. One afternoon on a family trip to Coney Island at just four years old, Mildred became separated from her family. When her mother found her in the area for lost children, the attendants said of Mildred, “we are sorry to see her go; she was keeping all the other children calm and happy.” Mildred and Howard met as neighbors and became childhood sweethearts. After a courtship that included ice cream dates at Coney Island, they were married on January 3, 1943. Just months later, Howard joined the U.S. Marines to support the World War II efforts, while Mildred worked as a supervisor of switchboard operators at New York Telephone Company. After the war, Mildred dedicated her life to her family. She and Howard raised four children in the same Brooklyn neighborhood where they met. There, Mildred was a devoted mother and avid volunteer at her church and children’s schools, serving on the Altar Rosary Society at St. Edmund Parish for many years. She was also a social force who thrived on hosting parties, family gatherings, and celebrations. After Howard’s death in 2005, Mildred moved to Charlotte to be closer to some of her children and grandchildren. She tended a garden of flowers that included her own mother’s live forever flowers from Brooklyn. Mildred loved to socialize at her townhome community’s pool, where she was well-loved and respected by all. She enjoyed eating ice cream, reading mystery novels, and she liked to watch movies, but only if they had a happy ending. Mildred loved to dress up in colorful fashions for the many family gatherings, holidays, and birthday celebrations where she was a vibrant and steadfast presence up through the last day of her long and happy life. She is survived by her children, Howard Noethiger (Donna), Richard Noethiger (Barbara), Margaret Ann Raimo (Bob), and Robert Noethiger (Connie); Grandchildren Andrew Noethiger (Tracy), Gregg Noethiger (Kate), Laura Noethiger McShane (Chuck), Jennifer Raimo Wilson (Keith), Pamela Raimo, Richard Noethiger Jr. (Lyndsay), Justin Noethiger, and Rebecca Noethiger; Great-grandchildren Tyler Noethiger, Sierra Kuske, Dominic Noethiger, Adrianna Noethiger, Lily Noethiger, and Henry Noethiger. The funeral service will be private. In lieu of flowers, donations may be made to the Juvenile Diabetes Research Foundation or St. Jude Children's Research Hospital. Arrangements are in the care of Heritage Funeral Home, Ballantyne Chapel. Online condolences may be left at www.heritagecares.com

Mildred Helen Noethiger, age 97, of Charlotte, NC passed away on July 29, 2021. Mildred was born on November 27, 1923 in Kings County, NY to the late Benjamin and Margaret Compton Choules. She was preceded in death by her beloved husband of... View Obituary & Service Information

The family of Mildred Helen Noethiger created this Life Tributes page to make it easy to share your memories.