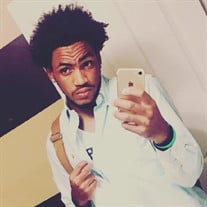 Services will be livestreamed from this page beginning at 10:55AM on Wednesday, May 4, 2022. Nicholas Tyler Collins, 28, of Matthews, NC, passed away on Wednesday, April 27, 2022. Nicholas was born on August 3, 1993 in Gaithersburg, MD. He was the son of Bennie L. Hadnott and Estell L. Collins.  Nicholas, who was affectionately called Nick, attended Lake Park Christian Academy and graduated from Weddington High School. He attended Bergen Community College in Paramas, NJ. An avid basketball player, he also enjoyed working out. Nicholas' personality reflected his joy and love for people. He enjoyed helping others and had the ability to make a person feel important. He loved to laugh and joke. Nicholas had a strong faith and he was raised knowing the Word. He knew his scripture and leaned on prayer for guidance.  Nicholas was employed as a customer service representative for Dick's Sporting Goods. His loss leaves a void in the lives of his parents, family members and friends. Loving memories will forever remain in the hearts of his mother Estell Collins of Matthews, NC; father, Bennie L. Hadnott (Barbara) of Teaneck, NJ; two brothers, Jonathan Collins (Shanee) of Waxhaw, NC; Bentizion Brady of Lawenceville, GA; sister, Danielle  Hadnott of Teaneck, NJ; a niece Taylor Collins, a nephew, Jaxon Collins; eight aunts, Barbara Jean Meeks, Nora Richardson, Mary Frances Trotman, Patricia Smith (Charles), Bertha Crawford (Willie), Nettie Rowland, Janice Reilly (Frank), Glenda Hadnott, and a host of cousins, relatives and friends.

The family of Nicholas Tyler Collins created this Life Tributes page to make it easy to share your memories.

Services will be livestreamed from this page beginning at 10:55AM...

Send flowers to the Collins family.