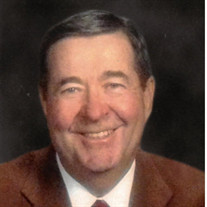 Paul Albert Finan, a resident of Windsor Run in Matthews, NC passed away on Sunday, April 10th, 2022, surrounded by his loving family. He was born on October 6, 1936 , in Newark, NJ the son of the late Marie & Oliver Finan. He attended St. Leo Grammar School in Irvington, NJ and St. Benedict Prep School in Newark, NJ. Paul was a class officer for four years and ran cross country track throughout each year. Paul graduated from Villanova University in 1958 and was actively involved in campus programs. He was the program director for station WVIL at Villanova, feature editor of the yearbook, member of the literary guild, as well as active in countless intramurals. In 1964, Paul married Teddy Elaine Skrove at San Juan Bautista Mission in Hollister, CA. He served two tours of duty in the Army Active Reserve, including extensive training for the Berlin Crisis. Paul went on to join Fieldcrest Mills in NY, where he managed a ten state sales program for many years. He later joined Springs Mills in Fort Mill, SC, where he worked until his retirement. Paul was a very active runner and proceeded to run 10 marathons including the New York City Marathon and the Jersey Shore Marathon. Paul was a long-time member of the Hospital Ministry at St. Gabriel Catholic Church in Charlotte, NC where he and his wife have been members for many years. Paul is survived by his wife Teddy and their three children, Tom and his wife Elizabeth of Aldie, VA, Christopher and his wife Regina of Douglasville, GA, Sheila of Charlotte, NC and his six beloved grandchildren, Grace, Peter, George, Isabella, Christopher Jr., and Keira Sulaine. He is also survived by his brother Bernard Finan of Lakewood, NJ and was preceded in death by his brother Oliver Finan and his sister Marilou Finan. A Mass of Christian Burial will be held on Thursday, April 21st, 11 AM at St. Gabriel Catholic Church in Charlotte, NC. Inurnment will be in the St. Matthew Garden of Forest Lawn East Cemetery in Matthews, NC. In lieu of flowers, memorials can be made to Villanova University, www1.villanova.edu or to the charity of your choice.

Paul Albert Finan, a resident of Windsor Run in Matthews, NC passed away on Sunday, April 10th, 2022, surrounded by his loving family. He was born on October 6, 1936 , in Newark, NJ the son of the late Marie & Oliver Finan. He attended St. Leo... View Obituary & Service Information

The family of Paul Albert Finan created this Life Tributes page to make it easy to share your memories.

Send flowers to the Finan family.