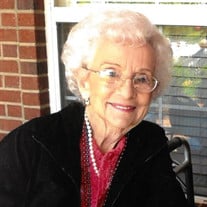 Pauline Harrison Stevens, 96, passed away peacefully on Sunday, January 16, 2022 at Legacy Heights Senior Living in Charlotte, North Carolina. Mrs. Stevens was born on October 5, 1925 in Mount Airy, North Carolina to the late Alfred Lee and Ella Mae Harrison. In 1941 Pauline married the love of her life and best friend, Charles Wayland Stevens. Pauline and Wayland were long time residents of Norfolk, Virginia where they lived for 65 years before moving to Charlotte, North Carolina in 2013. Pauline was a devoted daughter, sister, wife, mother, grandmother and great-grandmother. She was an accomplished seamstress and a dedicated homemaker. Together, she and Wayland enjoyed square dancing, bus tours and family gatherings. Survivors include loving daughter: Dianne S. Jacks, beloved son-in-law Randy Jacks and son-in-law John Pierce; grandchildren: Amy Jacks and Holly Gorski; great grandchildren: Walker Jacks and Rowan Edwards; Declan, Grace and Binx Young. Pauline was predeceased by husband Wayland and daughter Brenda S. Pierce; and several sisters and a brother. A private graveside service will be held on Wednesday, January 19, 2022 at 2:30 p.m. at Forest Lawn East Cemetery, 3700 Forest Lawn Drive, Matthews, NC. The family wishes to thank all of the caregivers and staff at Legacy Heights Senior Living in Charlotte, NC for their absolute love and devotion to Pauline during the time she lived there. They would also like to thank Hospice and Palliative Care, Charlotte Region for their kindness and compassion. On line condolences may be left for the Stevens family at www.heritagecares.com

The family of Pauline Harrison Stevens created this Life Tributes page to make it easy to share your memories.

Send flowers to the Stevens family.