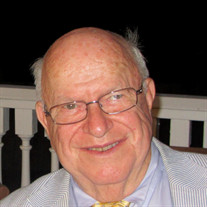 Phillip Van Tiem, age 86, of Charlotte, NC, passed away peacefully on April 15, 2022, with his loving wife by his side. Phil was born on October 4, 1935, in Grosse Pointe City, MI, the son of August and Margaret Van Tiem. Phil is survived by his wife of 58 years, Darlene and children Bradford (Sherry) and Molly (Martin) Jantzen and grandchildren Jonathan, Christopher, Van, Xander, his great-grandchild Ellis, brothers Thomas Sr (the late Helen) and Stanley (Leigh) and dozens of nieces and nephews. He was predeceased by his parents, August and Margaret, siblings Mary Louise, Augustus (the late Janice), Patricia Morgan (the late Kenneth), Barbara Conte (the late Felix), and Frederick (Janet Herrick). Phil attended Maire Elementary and St. Paul’s High School in Grosse Pointe City. After graduating high school, he was called to serve in the U.S. Army and was stationed in France. After being honorably discharged from service, he attended Michigan State University, where he met his wife, Darlene. He continued to complete a master’s degree in Hospital Administration and an MBA in Finance throughout his career. Phil started his professional career at GMAC and went on to work for St. John Hospital as Director of Patent Accounting for 35 years. A well-loved man, Phil enjoyed his family, traveling, community, and meeting new people from every facet of his life. Phil enjoyed so many things in life… playing all sports (especially football) and watching his Michigan State Spartans play. The annual sailboat party at his condo in Port Huron, Michigan, was another annual highlight that he looked forward to each year. He loved to cook and was primarily known for his wonderful soups. Phil’s other passions included gardening, swimming in the lake, hunting, fishing, and any type of outdoor activity. Phil was a very spiritual man who will be sorely missed by his family and his many friends. A celebration of his life will be announced at a later date. In lieu of flowers, please donate to the World Wildlife Fund.

Phillip Van Tiem, age 86, of Charlotte, NC, passed away peacefully on April 15, 2022, with his loving wife by his side. Phil was born on October 4, 1935, in Grosse Pointe City, MI, the son of August and Margaret Van Tiem. Phil is survived by... View Obituary & Service Information

The family of Phillip Michael Van Tiem created this Life Tributes page to make it easy to share your memories.