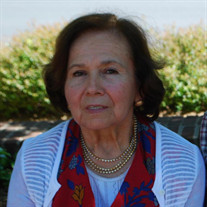 Mrs. Pia M. Franco was the second of four children born to her late parents, Jose Manuel Crespo and Maria Angelica Gonzales, in Quito, Ecuador. She attended Sacred Hearts of Quito High School. Afterwards, she worked as an associate at Sterns Jewelry store in Quito until the time of her marriage. Pia married her beloved husband, the late Dr. Galo Franco, in 1970. Together they moved to Philadelphia, PA where she raised her two sons, John and Paul. During her time in Philadelphia she worked as a medical technician taking care of the elderly. They retired to Fort Lauderdale, FL and later moved to Charlotte, NC in 2005. Those who were fortunate to have known Pia, knew her to be extremely devoted to God and her family. She was a strong advocate for education and sacrificed greatly to ensure her sons attended the best schools. As an adoring grandmother, Pia’s heart was fulfilled and her unending love carries on with them always. On the afternoon of July 16, 2021 Pia’s battle with Alzheimer’s disease came to a close. She was surrounded by her family at the time of her passing. She was 86 years old. Pia was preceded in death by her spouse , Galo Franco. Her spirit will continue to live on in the hearts of her devoted sons, John and Paul, two loving daughter-in-laws Blair & Andrea, three sweet grandchildren Lauren, Lyla, and Jackson, older sister, Gloria Proano, younger brother Jorge Crespo, and youngest sister Grace Gomez. A Mass of Christian Burial will be held in honor of Pia’s life at St. Matthew Catholic Church, 8015 Ballantyne Commons Pkwy, Charlotte, NC. The service is set to take place on Tuesday, July 27th with visitation starting at 10:00am and the service starting at 10:45am.

The family of Pia M. Franco created this Life Tributes page to make it easy to share your memories.

Mrs. Pia M. Franco was the second of four children born to her...

Send flowers to the Franco family.