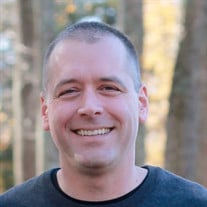 Raymond John Ackley “Ray” Of Charlotte,NC Mr. Ackley, 43, passed away on February 16, 2022. A Mass of Christian Burial will be held on Friday, March 4, 2022 at 11am at St. Matthew Catholic Church with Father John Allen Celebrant. The family will receive friends prior to the Mass 10-10:45am, Eulogy to begin at 10:45am. His graveside ceremony will be held on Monday, March 7, 2022 at 11am at Salisbury National Cemetery with full military honors. Ray was born on February 21, 1978 in Detroit, MI. Ray was a man of intense compassion, patience, and great generosity. He was a strong and respected leader but also a humble person, and a gentle and caring father, son, brother, and husband. Ray honorably served his country as a leader in the Army National Guard from 2005 to 2014. He rose to the rank of Captain, completing tours in Kuwait and Afghanistan. He earned eight medals and ribbons including the Meritorious Service Award for his selfless service, including as Company Commander of the 196th Signal Company, 113th Battalion. Raymond left the National Guard for the Army Reserve in 2014 to be more present for his family and continued to serve as a Reservist. Ray also had a successful civilian career as a Computer Engineer, working for Microsoft for over 13 years and previously for Ford Motor Company. He was known professionally as extremely smart, but more importantly as genuine, patient, and kind with his colleagues. He was a creative entrepreneur who graced the world with multiple inventions including a vegetable oil fuel switching device and an air conditioning system for small aircraft, both of which he turned into successful businesses. Ray was passionate about flying and loved the feeling of freedom he experienced in the air. He shared that passion with his family, flying his sons on adventures to the Bahamas and taking Adam to an epic University of Michigan Football game just months before he passed away. Ray was generous with his many talents and passions; he modeled his generosity by bringing his son along on volunteer Angel Flights to provide free transportation to people in need. Ray was fun-loving, adventurous, and had a voracious sweet tooth, which his sons have all inherited. Ray passed away doing what he loved. We pray that he will rest easy in heaven along with his Busia, Armstrong, Paddy, Grandpa Ackley, Aunt Kathy, and Uncle Richard. He is survived by his wife Ching; children Adam age 11, Benjamin age 6 and Thomas age 5 months; parents Raymond H. and Joanna (Jankowski) Ackley; sisters, Mary Ackley and Angela (Ackley) Nepa and her husband Dominic; niece, Lilyana and nephews, Zac and Matthew. In lieu of flowers, donations may be made to Angel Flight Soars (www.angelflightsoars.org), 2000 Airport Road Suite 227 Dekalb Peachtree Airport Atlanta, GA 30341.

The family of Raymond John Ackley created this Life Tributes page to make it easy to share your memories.