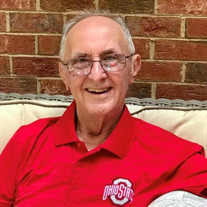 Raymond (Ray) Bickar, 83, of Charlotte, NC passed away Wednesday morning, April 13, 2022. Ray was born on August 7, 1938 in Canton, OH. He attended Timken High School in Canton, OH, where he trained in drafting, and The Ohio State University, where he majored in engineering. He met his wife, Chloe, on a blind date in November of 1960; they married in 1963. He worked as a draftsman before joining RAM Automotive in 1969. In 1989 he started his own business, Accutech Machine, where he worked until his retirement in 2002. After enlisting in 1961, Ray was invited to become a member of the 2nd Army Pistol Team in 1962. As a Master Shooter, he traveled the country giving advanced marksmanship training to both military members and civilians. In 1964, he was awarded the Distinguished Pistol Shot Badge; in 1965, he earned his place in the prestigious NRA 2600 Club. Even after his honorable discharge from the Army in 1963, he continued to shoot competitively for many years winning many medals and trophies. Throughout his life, Ray was a Bible class teacher, a deacon, and an elder. In the mid-2000’s, he and Chloe traveled with members of Providence Road Church of Christ, where they participated in building projects for The City of Angels children’s home in Cancun, Mexico. Before he was diagnosed with cancer, Ray also volunteered for the Crisis Assistance Ministry in Charlotte, NC. In his retirement, Ray took up golf, continued to be involved at church, and enjoyed traveling to their condo in Hilton Head, SC. Always wanting to stay active, Ray worked part-time at Blackstone Shooting Sports as a range officer and instructor. Ray loved history (especially presidential biographies), corny (‘Pap’) jokes, good food, Ohio State Football, and golf. More than anything, Ray was all about living life to the full. In 2020, he was diagnosed with esophageal cancer, which he fought fiercely for eighteen months. While he is loved and missed, he will now always shoot a 2700, make every hole-in-one, and all of his fish stories will be true. Ray is survived by his wife of 58 years, Chloe Bickar, along with three daughters and their husbands; Terri and Michael Pretiger of Oklahoma City, OK, Kim and Chris Collins of Charlotte, NC, and Michelle and Chris Challis of Oklahoma City, OK. He is also survived by his sister, Delores Pluto of Columbia, SC, as well as six grandchildren and 2 great-grandchildren, and several loving nieces, nephews, and other relatives. He was preceded in death by both of his parents and his brother, Frank Bickar, of Canton, OH. A memorial is planned for April 21, at 1:00pm at the Providence Rd Church of Christ in Charlotte, NC at 4900 Providence Road, Charlotte, NC 28226. The family would like to thank the members of Providence Road Church of Christ for their faithful support during this hard journey. We would also like to thank Novant Hospice Services and Heritage Funeral and Cremation Services for their caring assistance during this difficult time. In lieu of flowers, donations may be made to Crisis Assistance Ministry www.crisisassistance.org.

The family of Raymond "Ray" Bickar created this Life Tributes page to make it easy to share your memories.