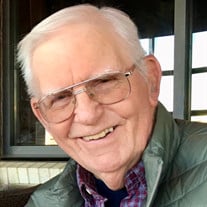 Raymond Arthur Davies, 92, of Charlotte, NC passed away peacefully on March 27, 2022 surrounded by family. “Ray” was born to Frank and Violet Davies on May 26, 1929 in Youngstown, Ohio. Ray grew up in Youngstown in his earlier years, then moved to Lisbon, Ohio in his teens where his family had a farm. Ray was quite the football player in high school and graduated from David Anderson High School, Class of 1948. Shortly after graduating from high school he met and married his best friend and lifelong love of 69 years, Vida Evans Davies, who preceded him in death in the fall of 2020. They met at a square dance at Guilford Lake and married one year later on July 30, 1951. During their years together, Ray attended and graduated from Cornell University, Class of 1952, where he studied Agronomy. He was a member of the ROTC and a Brother of Pi Kappa Alpha Fraternity. Ray was a Veteran of the Korean War where he served as First Lieutenant in the US Army, while Vida and their first son Jeff lived on base in Japan. They returned and lived in Lisbon, where his career in sales began at Chester Hoist. Accepting a job at Duff-Norton, the family, now including Frank and Susie, moved to Mt. Lebanon, PA where Cara was born. Several promotions from District Sales Manager to VP of Sales and Marketing at Duff-Norton landed them in Barrington Hills, IL and later in Charlotte, NC. He retired from Duff-Norton in 1993. They returned to Charlotte in 2016, after spending almost 20 years retired at Surfside Beach, SC. During their retirement, Ray and Vida enjoyed traveling together and balanced their love for the beach and mountains by spending summers hiking in Jackson Hole, Wy, and Grand Teton National Park. Ray, an avid golfer, could be found on the golf course on any weather-permitting weekend throughout his life. He even joined the “Hole-In-One” club! He enjoyed his golf until just recently. He also enjoyed reading, Trivia, Cribbage, Bridge, and watching sports on TV, especially his Buckeyes. He kept his technology skills amazingly strong as well. He loved birds and wildlife and watched his little birds at the feeder up until the very end. Although Ray enjoyed these pastimes, he mostly adored spending time with his family, and frequent visits from his children and grandchildren (with their significant others), and great-grandchildren. Nothing could hold a candle to his undying love for Vida though, for whom he has now joined in heavenly eternity. Preceded in death by his wife Vida, Ray is survived by his four adoring children: Jeff (Susan) Davies, Jackson Hole, WY, Frank (Susan) Davies, Matthews, NC, Susie (Bud) Bostic, Bostic, NC, and Cara (Nitesh) Lala, Davidson, NC; nine grandchildren: Nicolette (Stewart) McIver, WY, Sarah (Dave) Hauserman, NC, Emily (Cody) Roden, TX, Ashley (Doug) Exner, NC, Sierra Bostic (Shivam) Patel, FL, Bethany (Auston) Burgess, NY, Cody Bostic, Dhruv Lala, and Riya Lala, all of NC; four great grandchildren: Tyler, Kaitlyn, Jackson, and Ava; as well as numerous nieces and nephews. The family would like to especially thank the staff at the Laurels at Highland Creek for their care and friendship while Ray lived there during recent years, and to Charlotte Hospice for their assistance in recent weeks. In lieu of flowers, please consider donations to your favorite charity or to Juvenile Diabetes Research Funding (www.jdrf.org), Charlotte Hospice & Palliative Care, Charlotte Region (www.hpccr.org/give/make-a-donation), or to a favorite charity of Ray & Vida’s which was the Shriners Children’s Hospitals (www.shrinerschildrens.org). A private family “Celebration of Ray’s Life” will be held at a later date. Arrangements are in the care of Heritage Funeral Home, Weddington Chapel. Online condolences may be left at www.heritagecares.com.

The family of Raymond Arthur Davies created this Life Tributes page to make it easy to share your memories.