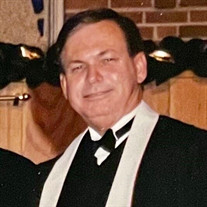 Rev. Charles Lee Phelps, Jr., 81, of Waxhaw, NC, passed away unexpectedly on Friday, April 30, 2021, in Charlotte, NC. Chuck, as he was known to his many friends, was born October 12, 1939, in Memphis, TN to the late Charles Lee Phelps, Sr. and the late Elsie Hazel (Sharpe) Phelps. His best friend and wife of 57 years, Marjorie Dare (Yount) Phelps, received her reward of eternal glory in October 2019. Chuck was a 1957 graduate of Southside High in Memphis, the Salvation Army Southern Training College (Evangeline Booth College) in Atlanta, GA, and the University of Louisville. Growing up in Memphis, the Salvation Army was pivotal for him in his formative years and opened the doors for a lifelong service of ministry. Throughout his ministerial career, he held pastoral and financial development posts in the Salvation Army. Chuck was also affiliated with Oral Roberts Evangelistic Association, Inspirational Networks (INSP), Jungle Aviation and Radio Service (JAARS), and Sid Roth Ministries. He also held professional positions with International Harvester and Western Kentucky Gas. Marge ardently and spiritually supported him in each of these tenures. Chuck and Marge shared in the fellowship and formed lifetime bonds with several Charlotte area congregations including St. Giles Presbyterian Church, Evangel/Image Church, Antioch International Church, and Re7 Women's Ministries. Together, they supported several faith and spirit-filled friends in planting churches and ministries, never missing an opportunity to share the love of Jesus and preach of His compassion, grace and glory. He most recently began attending Lake Wylie Christian Assembly of God. Chuck was proud to be a direct descendant of the Rev. Henry Pattillo (1726-1801) of Scotland, the influential pioneer of the Presbyterian Church in Provincial North Carolina, including the period of the Regulator Movement and the Revolutionary War. His direct Phelps ancestors arrived in Baltimore and migrated south to settle North Carolina, Georgia, Mississippi, and ultimately Tennessee. He is survived by his four children, Becky Zupcic (Bob), Bob Phelps (Michelle), Tim Phelps (Amy), and Hope Fote (Paul). His thirteen grandchildren are Laura Phelps-Baltodano (Leonel), Tyler Zupcic (Micayla), Drake Zupcic (Sarah), Lee Phelps (Trisha), Zack Phelps (Heather), Olivia Zupcic, Abigail Phelps, Will Phelps, Blake Phelps, Rileigh Phelps, Christian Zupcic, Madisyn Fote, and Emily Fote. His three great-grandchildren are Lucas Baltodano, Liam Baltodano, and Luciana Baltodano. He is survived by seven brothers and sisters who reside in the greater Memphis metro area: Shirley Nail, Sammy Phelps, Mildred Gump (Mike), Jerry Phelps (Sherry), Jeanette Cook (Jim), Kay Carter (Jethro), and Gay Hughes (Ronnie). He was predeceased by his brother, Lt. Terry Wayne Phelps (Pam). He is also survived by his brother-in-law, Harold Yount of Atoka, TN. He had a large number of nieces and nephews that he and Marge loved as well. “But those who wait on the Lord shall renew their strength. They shall mount up with wings like eagles, they shall run and not be weary, they shall walk and not faint.” (Isaiah 40:31 NKJV). Pray for the peace of Jerusalem: "May they prosper who love you. Peace be within your walls, Prosperity within your palaces." For the sake of my brethren and companions, I will now say, "Peace be within you." Because of the house of the Lord our God I will seek your good." (Psalms 122: 6-9). A private memorial service will be shared via social media and officiated by Rev. Bob Zupcic on Saturday, June 5, 2021, at Heritage Funeral Home in Weddington, NC. In lieu of flowers, memorial donations may be made to Highway to Zion Ministries (704-365-2728), 6132 Robley Tate Court, Charlotte, NC 28270. Family is in the care of Heritage Funeral Home, Weddington Chapel. Online condolences may be made at www.heritagecares.com.

The family of Rev. Charles "Chuck" Lee Phelps created this Life Tributes page to make it easy to share your memories.

Send flowers to the Phelps family.