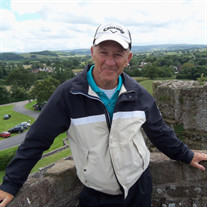 Richard “Rick” Rhea, 76 years of age, of Indian Land, South Carolina, went to his heavenly home on March 5th, 2022. He lived a selfless life, always putting others' needs first. Rick was born on November 11th, 1945 to the late Harold and Alice Rhea in St. Louis, Missouri. His family moved from St. Louis to Poplar Bluff, Missouri and lived there until he was 12. Rick could sit for hours telling stories of his years in the small town of Poplar Bluff and the fun and mischief he and his siblings would get into. The family then moved to Phoenix, Arizona where Rick attended high school. With two brothers in the United States Air Force, Rick was eager to serve his country and left high school at the age of 17. Rick was a true patriot and proudly served his country in the United States Air Force for 3 years serving in Taipei, Taiwan during the Vietnam era. He completed his high school education while in the military and years later earned his Associates Degree. He spent the next 40 years working in avionics and aircraft maintenance. Rick loved airplanes and his son, Ricky, will continue that legacy. Rick met his beautiful wife Nancy of 38 years while working at Frontier Airlines and they wed in Littleton, Colorado on November 19th, 1983. After retiring in 2007 from US Airways, Rick spent his time golfing with his best buddies, loving on his grandchildren, and cruising the world with his wife. He never met a stranger and enjoyed meeting people from different countries and learning about their culture. He was a faithful servant of God and traveled to Kenya and Jamaica on mission trips. Rick is survived by his beloved wife and best friend, Nancy Rhea; daughter, Tracie Heselius (John); son, David Rhea (Ria); son, Richard “Ricky” Rhea (Bonnie); daughter, Lisa Rhea; mother-in-law Ethel Thomas; eight grandchildren: Dylan Torgerson; Bridget Torgerson; Dayna Bielesch (Marty); Ashley Rhea; Zander Rhea; Maggie, Charlie, and Jack Rhea; and three great-grandchildren: Gwen, Ella, and Nora Bielesch. He is also survived by his siblings Larry Rhea; John Rhea (Natalie), and Pam Jones (Bob), in addition to nieces and nephews: Taylor Hale, Mary Jones, Jennifer McKusick, Karen Seagrave, and Keith Rhea. Services for Rick will be held on Thursday, March 10th at Siler Presbyterian Church. The family will receive friends and guests from 1:30–2:30PM, with a funeral service at 3:00PM. The service will be live-streamed and available for playback on the Siler Presbyterian Church YouTube channel: https://www.youtube.com/channel/UCxpb_p9i_bGF87NBlFExvBw Those who knew Rick well are keenly aware of his tremendous love for his 8 grandchildren and 3 great grandchildren. Their individual interests and gifts allowed him to form unique and treasured relationships with each of them. His arms were especially comforting to his granddaughter Charlie - a sweet 4 year old little girl with Autism. "Pa" had just the right gentleness, kindness, and love to comfort Charlie for countless hours. In lieu of flowers, the family is asking that you would consider making a donation to the Autism Society of North Carolina. Autism Society of North Carolina Attn: Donations Coordinator 5121 Kingdom Way, Suite 100 Raleigh, NC 27607 919-865-5056 Online Donations: https://www.autismsociety-nc.org/donate-online/

The family of Richard "Rick" Rhea created this Life Tributes page to make it easy to share your memories.

Send flowers to the Rhea family.