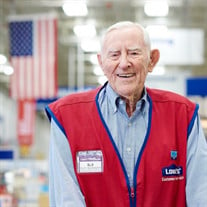 Robert Levan Adams, 97 of Matthews NC, passed away at home on November 12, 2021. Mr. Adams was born on January 19, 1924, in Goldsboro, NC. He was the son of James Dana Adams and Maggie Beatrice Adams. Mr. Adams’ friends and family knew him as Bob. He graduated from Guilford College with a Bachelor of Science degree. Bob had many life accomplishments. He had a military career with the U.S Navy serving on USS Gherardi. He worked in electrical product sales, founded two sales agencies, then became semi-retired and worked at Lowes Home Improvement. He was married to Tommie Gail Clegg on January 29th, 1966. Bob was a Christian man who loved his family and spending time with them, especially on Labor Day weekends at the beach. Bob was an avid golfer and sang in his church choir for many years at Matthews United Methodist. Bob wanted to be remembered as a loving father, a devoted husband, and for his hard work ethic. He was born during the Great Depression, served his country in World War II including D-Day in Normandy, raised six children, and worked until he was 93 years old. He introduced himself to people as “Sweet Ol’ Bob- and don’t abbreviate!” He was known for his quick wit and love of laughter, as well as his incredibly positive outlook on life. His qualities were greatly admired and are carried on by those he impacted. Bob is survived by his children Sandy Sink, Rebecca Person, spouse Griffin, Amy Pearson, Bill Adams, spouse Janita, Dana Reeves, spouse Dan, Jennifer Fore, spouse Scott. His Grandchildren are Michael, Kristin, Bobby, Griff, Tricia, Katie, Emily, Cassie, Gracen, Alexandra, Carson, Nathaniel, and Paxton. His three Great Grandchildren, Kara, Bandon and Emma. Preceded in death by his wife Tommie and Brothers Randolph, Marshall, Charlie, and sisters, Hilda, Hannah, and Hazel, and son-in-law, Dwight Sink. The visitation will be held at 12:00 PM at Matthews United Methodist Church. With the Service starting at 1:30 PM. In lieu of flowers, the family has requested memorial contributions in Bobs name, be made to Matthews United Methodist Church https://onrealm.org/matthewsumc/-/form/give/now

Robert Levan Adams, 97 of Matthews NC, passed away at home on November 12, 2021. Mr. Adams was born on January 19, 1924, in Goldsboro, NC. He was the son of James Dana Adams and Maggie Beatrice Adams. Mr. Adams&#8217; friends and family knew... View Obituary & Service Information

The family of Robert Levan Adams created this Life Tributes page to make it easy to share your memories.

Robert Levan Adams, 97 of Matthews NC, passed away at home on...

Send flowers to the Adams family.