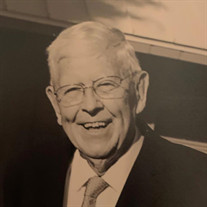 Robert “Bob” McClements, 92, born and raised in Philadelphia, passed on October 15, 2021, surrounded by love. Bob was born on December 1, 1928, in Philadelphia, PA to Robert and Emma (Connor) McClements. After graduating from Frankford High School Bob received a B.A. of Science degree in civil engineering from Drexel University in 1952, the same year he married his first wife, Barbara (Rose) McClements. Later he attended graduate courses at Columbia University and completed an advanced management study program at the Harvard Business School. Bob came from humble means as a child of Scottish and Irish immigrants and throughout his career, with his brilliant mind, charismatic character, and unfaltering support from his wife, Barbara of 60 years, Bob worked his way up the ranks. At the time of his retirement in 1992, Bob was Chairman, President and Chief Executive Officer of Sun Company, Inc.. McClements joined Sun in 1965 as plant manager of its Great Canadian Oil Sands (GCOS) mining and processing project. GCOS and the work he and his colleagues accomplished in Fort Mac Murray was one of his proudest times in his life. Before joining Sun, Bob was project engineer for Foster Wheeler Corporation from 1952 to 1954. He then served in the U.S. Army until 1956, when he joined Catalytic Construction Company. His work as a project manager for Catalytic took him to 13 countries, including a two -year assignment in Japan. Not one to live life half-heartedly, McClements also served on numerous boards some which included the Board of Directors of the United Way of Southeastern Pennsylvania, Bethlehem Steel Corp., Greater Philadelphia First Corporation, Urban Affairs Partnership, Drexel University and Grove City College. McClements, salt of the earth, brought the values of his parents along with him in his life journey, and was often mistaken as a farmer or grounds keeper of the family property in Pennsylvania. Though always even keeled and composed (except when talking politics), Bob had the complete inability to tell a joke without falling apart into fits of laughter so hard that no sound escaped from his mouth. This brought people around him tears of laughter every time. His delight in good humor was infectious. Bob was a true maverick and the number of adventures he had throughout his life with Barbara, his daughters, and Marjorie (Moll) McClements, his just as adventurous and lovely wife that he married at the age of 86, could fill volumes. His courage and bravery to live a truly expansive life took him around the world to experience it to its utter fullness. His propensity for taking chances and encouraging those around him to do the hard things, offered a solace that translated for many that everything will turn out fine and life is meant to be lived vivaciously. Nowhere was Bob more content than when he was visiting with friends and family on the back porch of his home in Key Largo after a day on his boat. He will be remembered for his 1000-watt smile that twinkled in his eyes and which filled a room. Bob is survived by his beautiful and loving wife, Marjorie (Moll) McClements, loving daughters Kathleen Kozlowsky and Mary McClements, and grandchildren Mason and Eula who will carry him in their hearts forever. Bob is predeceased by his first wife Barbara McClements, sisters Betty Robinson and Kathleen Froggatt, brother Jack McClements, Cousin Thelma Howe, son-in-law Paul Kozlowsky, and niece Paige Robinson. In lieu of flowers, memorial donations may be made to INDSPIRE a Canadian non-profit that invests in the education of First Nations, Inuit, and Métis people. https://indspire.ca/ Bob requested that there not be a memorial service but rather a small family gathering at a later time.

Robert &#8220;Bob&#8221; McClements, 92, born and raised in Philadelphia, passed on October 15, 2021, surrounded by love. Bob was born on December 1, 1928, in Philadelphia, PA to Robert and Emma (Connor) McClements. After graduating from Frankford... View Obituary & Service Information

The family of Robert McClements created this Life Tributes page to make it easy to share your memories.

Send flowers to the McClements family.