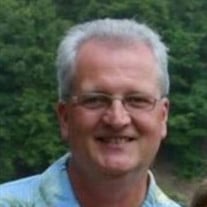 Robert “Bob” Alan Rodkey, age 62, passed away Thursday, November 25, 2021, surrounded by his loved ones. He was born on May 8, 1959 in Lewistown, PA to parents Alan Leroy Rodkey and Carole McClintic Weber; both preceded him in death. Bob grew up in southern Pennsylvania and, after marrying Cassy Lawson-Rodkey in 1988, settled down in New City, NY where his three children were born. In 1999, Bob and his family moved down to Charlotte, NC where they would reside for years to come. Bob received a Bachelor of Arts in theater from Mansfield College in Pennsylvania. While Bob had a passion for theater, he ended up pursuing a career in business and was the Vice President, Regional Construction Manager of the Corporate Properties Group for Wells Fargo. He took pride in his work and was instrumental in supporting Wells Fargo Advisors and dedicated over 29 years to the bank. Bob was raised Lutheran but after moving to Matthews in 1999 he became a proud member of Matthews Presbyterian Church. Bob’s simple pleasures in life included being out on the water fishing with his children, watching the Washington Redskins and Penn State football teams and vacationing with his family at Hilton Head Island every Fathers Day. He was a supporting and loving father, husband, brother, son and friend. Bob was a comical and witty man, never failing to make his friends and family laugh. Bob is survived by his former spouse Cassy Lawson-Rodkey; children, Sarah (30), Logan (27) and Charlotte (25); siblings Debra (Rodkey) Clark, Steven Rodkey, and Jennifer (Rodkey) Davidovich and many other beloved family and friends. A visitation will be held at 12:00PM on Saturday, December 11, 2021 at Matthews Presbyterian Church on 207 W John St. The funeral service will start at 1:00PM and the reception will follow. In lieu of flowers, to honor Bob Rodkey, his children are humbly and graciously requesting financial support for medical and funeral expenses through the link provided https://www.giveinkind.com/inkinds/D7E0K1R/support-for-the-rodkey-s-1

The family of Robert Alan Rodkey created this Life Tributes page to make it easy to share your memories.

Send flowers to the Rodkey family.