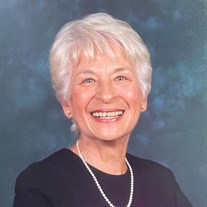 Shirley Anne (Kapcheck) Young was granted eternal rest on June 7, 2021. She was born on December 16, 1935 in Norwood, MA. The daughter of the late Joseph and Annie (Krill) Kapcheck, Shirley grew up in Walpole, MA listening to her father’s stories of life in the Old Country, his challenging childhood, and his adventures to and in America. Sundays were spent with her parents, brother, aunts, uncle and cousins at her maternal grandparents’ dairy farm in South Walpole. From both of her parents, Shirley learned her moral code, the value of hard work, the importance of family, and above all, her faith. She was so proud of her Ukrainian heritage and small town roots. After graduating from Walpole High School, Shirley attended Bryant and Stratton in Boston, completing a year-long course in just nine months. She was an expert at short hand (leaving notes behind that her children will never be able to decipher) and could type 100 words a minute. She was just 19 when, as a secretary at Vermont Marble Company in Boston, her life was changed forever. It was love at first sight for her when Larry Young walked in the door for a job interview. She instantly said a prayer that he would get the job (he did) and after what they both described as a “crazy courtship” (interrupted only by Larry’s stint in the Army), they married in 1960. In their 44 year marriage, there were tragedies to overcome and joys to be celebrated, and through it all they remained deeply in love and dedicated to each other. Shirley often said that there were more good times than bad, and was blessed because this was so. Throughout her life, Shirley was a devoted daughter, sister, wife, mother, grandmother and friend. She was a fantastic cook and was featured in newspapers not once, but twice for her recipes. Her pies were legendary and graced many bake sales, holiday and Sunday dinner tables. “Too bad she died, she made good pies” was a phrase she gleefully repeated about her own future passing. In addition to keeping (literally at times) the home fires burning, Shirley was employed by various companies including General Electric in Cleveland, OH and Siliski, Murphy and Buzzell, CPA’s in Rutland, VT. She also assisted her husband with his career and enjoyed “temping” later in life. A New Englander at heart, Shirley never hesitated to join her husband wherever his career took them. From Ohio, to Texas, to Vermont, to Georgia, she insisted that each new home was better than the last and always tried to embrace the change with a positive attitude. Her final years were spent in South Carolina, allowing her to attend with much pride, her grandchildren’s sporting events, recitals and family gatherings. Shirley was a talented string musician and played the violin, guitar and ukulele. She was a voracious reader and gifted writer, and was always quick to write a note of thanks, encouragement, support or praise. If you were one of the many on the receiving end of a “Shirley Letter”, you no doubt were impressed with her impeccable penmanship too. Shirley is survived by her loving children, son Larry, Jr. (wife Mimi Rosenheim) of San Francisco and daughter Lisa (husband Scott Palladino) of Charlotte, NC, her adored and adoring grandchildren, Giselle and Alec Palladino and Walker Young, her nephews Jeff, Jim and Robert, her niece Karen and many grand nieces and nephews. She is predeceased by her beloved Larry, her brother Joey and infant sister Barbara, her infant sons Joseph and Paul, and by her niece and Goddaughter Teri. A Mass of Christian burial will be held at 11am on Tuesday, June 15, 2021 at St. Matthew Catholic Church with Father Peter Ascik Celebrant, the family will receive friends beginning at 10am. Interment will be 11am on Thursday, June 17, 2021 in Knollwood Memorial Park in Canton, MA. In lieu of flowers, her family has requested that you honor Shirley by writing a note to anyone in need of having their spirits lifted, just as Shirley always did.

Shirley Anne (Kapcheck) Young was granted eternal rest on June 7, 2021. She was born on December 16, 1935 in Norwood, MA. The daughter of the late Joseph and Annie (Krill) Kapcheck, Shirley grew up in Walpole, MA listening to her father&#8217;s... View Obituary & Service Information

The family of Shirley Anne Young created this Life Tributes page to make it easy to share your memories.