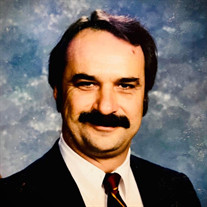 Stephen Edward Pitt Sr., age 78, of Indian Trail, North Carolina, passed away on Thursday, September 23, 2021 after prolonged illness. Steve, whose nickname to family and friends was “Godfather”, was born April 14, 1943 to Irene Pitt of Tarboro, North Carolina. Steve, an Eagle Scout, graduated from Tarboro High School in 1961, and then went on to attend Saint Andrews Presbyterian College, where he met his wife Abbie Eileen Moore, “the best thing that ever happened to me” as stated in his papers found after his passing. In his own hand, Steve wrote, “Abbie, if ever anyone should write my life’s story for whatever reason…you’d be there between each line of pain and glory, ‘cause you are the best thing that ever happened to me.” Steve would go to join the United States Air Force; 1966-1970. He and Abbie were stationed in Lubbock, Texas, where Steve served as a flight instruments instructor. Steve then attended the University of North Carolina at Charlotte, where he obtained both his Bachelor’s and Master’s degrees in Education. After graduation, Steve served as a career educator for the Charlotte Mecklenburg School System as a counselor, and then as an administrator; at The Street Academy, West Charlotte High School, and Matthews Elementary. Steve was an avid and steadfast member of Indian Trail Presbyterian Church. He was a Sunday school teacher, led Wednesday morning Bible Study sessions, cooked for and fed the homeless, and served on the church council for many years. He was a true man of God and loved our Lord. Steve loved life. He loved fishing, golfing, and played church softball for many years. He was also a natural born leader; Steve served as Treasurer for the Stallings Fire Department, was President of the Indian Trail Athletic Association and was Secretary of The Babe Ruth Baseball Association. He was a duplicate Bridge Master, and also enjoyed his weekly meetings “at work” with his friends, as well as spending time with his family. Steve is survived by his loving wife of 56 years, Abbie Eileen Moore Pitt; his son Stephen Edward Pitt Jr. (Jen), two grandchildren, Owen Pitt and Georgia Pitt; his brother-in-law Dennis Moore (Debra); and four nieces Karen Prewette (Kent), Amanda Ladd (Duke), Keyna Rankin (Chaz), and Amy Russo-Dahl (David), as well as several great and great great nieces and nephew. Visitation will be held outdoors at 2:00 pm at Lakeland Memorial Park, 1901 Lancaster Avenue, Monroe, N.C. on September 30, 2021. Services will begin at 3:00 pm. In lieu of flowers, memorials may be made to Indian Trail Presbyterian Church, P.O. Box 187 Indian Trail NC, 28079. “What we once enjoyed and deeply loved we can never lose, for all that we loved deeply becomes part of us.” Helen Keller

The family of Stephen E Pitt created this Life Tributes page to make it easy to share your memories.

Send flowers to the Pitt family.