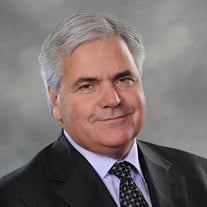 Steven Richard Berrard, passed away unexpectedly on June 7th, 2021, at his house in Charlotte North Carolina. He was born July 23,1954 to Edward and Elfriede Berrard. In his younger years Steve enjoyed football and went on to continue to play at Wofford college. Steve found success in all the endeavors he pursued. He began his career as a public accountant at Coopers & Lybrand, an international accounting firm, fresh out of business school at Florida Atlantic University. He was one of the youngest managers at the firm, on the partnership track, when he met Wayne Huizenga, his longtime friend and business partner. Steve served as the Co-Founder and Co-Chief Executive Officer of AutoNation, Inc., the nation's leading automotive retail company. The operations of AutoNation include more than 400 automotive dealerships, National Car Rental, Alamo Rent-A-Car, and CarTemps U.S.A. In three years, Steve guided AutoNation from a fledgling enterprise to the 83rd largest company on the 1999 Fortune 500. He then served as President of Huizenga Holdings, Inc., a real estate management development company. Prior to joining AutoNation, Steve served as President and Chief Executive Officer of the Blockbuster Entertainment Group, at the time the world's largest video store operator. Steve was responsible for the direction and operation of Blockbuster, Showtime Networks, Spelling Entertainment Group, Paramount Parks, and Virgin Interactive Entertainment. Steve and Wayne sold Blockbuster Entertainment to Viacom Inc in 1994 for 8.4 billion. After years in the corporate spotlight, Steve formed his own private investment firm, New River Capital Partners. This eventually led him to Charlotte, NC where he partnered once again with Wayne Huizenga to purchase Swisher, a thriving hygiene company from Patrick and Laura Swisher who became neighbors and great friends. Along with his corporate endeavors, he started Refined to Radical Motorcars with his father-in-law, Doug. Doug was an auto enthusiast and former race car driver which gave Steve the craving to get back into auto sports. In 2017, his passion for the auto industry inspired him to work on his one last deal. With that in mind, he co-founded RumbleOn. RumbleOn is an e-commerce company using innovative technology to aggregate and distribute pre-owned vehicles. His last professional deal was the pending merger with RideNow. He expressed how this was the biggest and most exciting deal of his professional life. He just loved to chase the deal! As much as he loved work and chasing those deals, his commitment was always to his family. Every move he made was calculated and with purpose. He is survived by his loving wife and best friend, Sarah Monique, his five children- Michelle Berrard-40 (Cayla), Megan Berrard Miehe-37 (Phillip), Brittany Butler Berrard-23, Blake Berrard-15, and Brooklyn Berrard-13, and two grandchildren- Maxwell-16 months and Henry- 2 months. He adored spending time on the couch watching TV with everyone but especially Grey’s Anatomy with Brooklyn, cooking dinners, playing practical jokes, telling stories, and playing computer games with the only other man in the house, his son Blake. He was the center force of the Berrard family and he was surrounded by love and admiration. Steve inspired the lives of countless family, friends, and colleagues with his larger than life spirit. He always filled the room with his presence. That presence will be missed by everyone that had the honor of knowing him. Whether it was inspiration or a lesson, if you knew Steve then your life was enhanced for the better. Fly high Steve. Those that you have left behind will forever live with your spirit. We all love you! Rest Easy. Visitation for family and close friends will be held on Friday, June 11, 2021 from 1:00 PM until 2:45 PM at Heritage Funeral Home, Weddington Chapel, 3700 Forest Lawn Drive, Matthews, NC 28104 with funeral services beginning at 3:00 PM in the Funeral Home Chapel. Interment following the service will be held in the Berrard Family Estate at Forest Lawn East Cemetery. Flowers are welcome or memorial donations may be made to St. Jude's in Steve's memory.

Steven Richard Berrard, passed away unexpectedly on June 7th, 2021, at his house in Charlotte North Carolina. He was born July 23,1954 to Edward and Elfriede Berrard. In his younger years Steve enjoyed football and went on to continue to play... View Obituary & Service Information

The family of Steven Richard Berrard created this Life Tributes page to make it easy to share your memories.

Send flowers to the Berrard family.