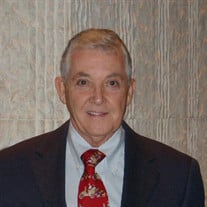 On April 2, 2022 Terry Wayne Herrington of Lake Wylie, SC left his extended illness, his pain, and his vision loss behind and walked into the Light of His Love and received the comfort of His everlasting Peace. Born in Salisbury, NC Terry spent his youth in Oxford. He attended John Nichols High School and Catawba College before joining the Navy. After his service he returned to Central Piedmont Community College and began a career as a Chemical technician for Fiber Industries, later Hoechst Celanese. Terry retired in 1997. Terry’s first pet, Jenny, brought him to his person and soon to be wife, Tricia in 1987. They married in 1992 and for the next 30 years shared their home with Great Danes, Irish Setters, cats, horses and a mule. Terry was an accomplished road cyclist riding 120 miles most weeks for many years. He completed many centuries (100 mile rides) including 10 finishes of the Assault on Mt. Mitchell. He also played with the men’s ice hockey league and loved to read. An avid outdoorsman, Terry shared this passion with his nephew, Jim Herrington and friends. Later having found “a girl” who shared this passion, Terry and Tricia spent a number of weeks each year exploring National Parks of the US and Canada camping, hiking, canoeing, backpacking, and horse packing into the backcountry. Terry loved sunsets, high vistas, wildlife and wildflowers. He treasured Mother Earth and spent much of his time improving and caring for his beloved farm, Willowhaven. He was a kind, caring, and giving soul with a sense of humor and a personality that left an impression. Those carrying Terry’s love and impact forward include his wife, Dr. Tricia Young, sister Mary Patricia Jackson (John David), brothers William Owen Herrington and Don Barry Herrington, 3 nieces, 4 nephews, devoted canine companions Mitchell and Bryce, his mule, Ruth and horse, Spike. In lieu of flowers, memorial gifts may be given in support of one of Terry’s favorite charities including The National Park Foundation (tribute gifts), Christian Appalachian Project, Doctors Without Borders, and the Sarcoma Foundation of America. Please join us to celebrate Terry’s life on May 16, 2022 at Camp Thunderbird in Lake Wylie from 11am until 2pm. A short service will be held at 11:30AM. A gathering for all Terry and Tricia’s family and friends will follow the service. Lunch will be provided. Weather permitting this celebration will be held outdoors. Dress is comfortable/casual. Tricia asks that you bring memories and pictures to share. “The grasslands of the wilderness overflow; the hills are clothed with gladness. The meadows are covered with flocks and the valleys are mantled with grain; they shout for joy and sing.” Psalm 65: 12-13 “My Presence will go with you and I will give you rest.” Exodus 33:14

On April 2, 2022 Terry Wayne Herrington of Lake Wylie, SC left his extended illness, his pain, and his vision loss behind and walked into the Light of His Love and received the comfort of His everlasting Peace. Born in Salisbury, NC Terry spent... View Obituary & Service Information

The family of Terry Wayne Herrington created this Life Tributes page to make it easy to share your memories.