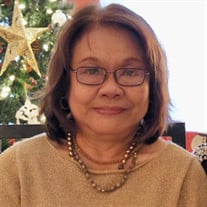 Thelma Jaen Alcordo, 77, of Charlotte, NC, formerly of Farmington Hills, MI, passed away at home on Friday, October 8, 2021. Thelma was born on December 17, 1943 in Carcar City, Cebu, Philippines, daughter to the late Anastacio and Catalina Alcordo. She completed her primary and secondary education at St. Catherine’s School in Carcar, graduated salutatorian of her class in high school, and then went on to pre-nursing at St. Theresa’s College in Cebu City, an exclusive school for girls. Called “Temoi” by her classmates, Thelma was known for being a natural born leader with a big heart. She was also fond of writing and was the editor of her school paper. In 1965 she graduated from the Southern Islands School of Nursing in Cebu City with her nursing degree and in 1968, as part of the prestigious U.S. Exchange Visitors Visa Program, came to the United States to work at Jefferson Medical College and Hospital in Philadelphia, Pennsylvania. In 1969, Thelma moved to Detroit, Michigan to work at Grace Hospital, then at the Intensive Care Unit of Detroit Osteopathic Hospital before finding her professional home at the American Red Cross (ARC), for which she stayed a loyal employee for the remainder of her nursing career. In 2004, Thelma said goodbye to her beloved ARC family and retired from her role as Pheresis Operations Supervisor for the Southeastern Michigan Region Blood Services in Detroit. Thelma was a woman of many talents and loved the arts. She enjoyed reading, writing, attending plays, musicals, ballets and symphony orchestra concerts, scrapbooking and putting together photo albums. She was skilled at cooking, knitting, crocheting, and counted cross stitch. Thelma also loved to travel and dine out. She explored the United States extensively, coast to coast, up and down the eastern seaboard, throughout the Midwest, the Great Lakes, the West Coast and Hawaii. Thelma also vacationed in Italy, France, Austria, Switzerland, Germany, Thailand, Australia, Canada, and frequently returned to the Philippines to visit relatives. During her retirement, she continued to travel, self-published her own book, and in 2008 started a website for classmates of her alma mater, St. Catherine’s school (comprised of self-titled “Catherinians”), to network, share stories and post articles of interest. Upon moving to North Carolina, Thelma volunteered her time at the library of St. Matthews Catholic Church and became a member of the Southwest Charlotte Queen of Peace Rosary Group, a group of Filipino friends who have devotion to the Blessed Mother. Above her penchant for writing, traveling, and the arts, Thelma’s greatest joys were spending time with her family and grandchildren, and watching University of Michigan football games. She was a strong, independent and caring mother and grandmother. Thelma was an ardent, prayerful Catholic, and loved our Lord Jesus Christ. Thelma is survived by her daughter Tara Eaton and son in-law Shane, and grandchildren Jade and Liam. Thelma was the eldest of seven siblings, being preceded in death by Winifredo Alcordo, and survived by sisters Jocelyn Alcordo Abellana, Nimfa Alcordo, Brenda Alcordo Thomson, Edith Alcordo Cardeño, and brother Miguel Alcordo, as well as numerous other extended family members. Visitation for family and friends was held Saturday, October 18, 2021 from 10:00 AM until 12:00 PM at Heritage Funeral Home, Weddington Chapel, 3700 Forest Lawn Drive, Matthews, NC 28104. The funeral mass for family and friends was held Saturday, October 23, 2021 from 11:00 AM until 12:00 PM at St. Fabian Catholic Church, 32200 W 12 Mile Rd, Farmington Hills, MI 48334, with the instate to begin at 10:00 AM.

The family of Thelma Jaen Alcordo created this Life Tributes page to make it easy to share your memories.

Send flowers to the Alcordo family.