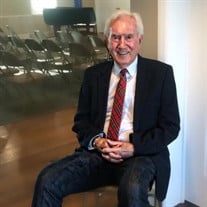 Tom Harte Moore, 89, passed away on November 29 2021 surrounded by loved ones. He was a shining example of faith, integrity, character, and grace for his family and friends. Tom was preceded in death by his beloved parents, Otha Harte and... View Obituary & Service Information

The family of Tom Harte Moore created this Life Tributes page to make it easy to share your memories.

Send flowers to the Moore family.