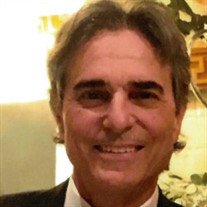 Dr. Megremis, 67 of Charlotte entered into the presence of God in the early morning of Saturday, May 8, 2021 after suffering a pulmonary embolism on Friday. Funeral services will be held at 11 am Wednesday, May 12 at St. Nektarios Greek Orthodox Church, 7108 Kuykendall Rd, Charlotte NC 28270. Burial will follow at Forest Lawn East Cemetery in Matthews. His family will receive friends Tuesday evening from 5 until 7 PM with a Trisagion service held at 6 PM at Heritage Funeral Home, 3700 Forest Lawn Dr, Matthews NC 28104. Tommy was born October 27, 1953 in Greensboro to Lampros Louie T. and Theodora Megremis. He attended Grimsley High School and graduated in 1972. He was a great athlete and student, playing baseball and softball well into his adult life. Tommy received his Bachelor of Arts from UNC Charlotte in 1976 and then moved on to graduate with his Master of Science in Chemistry in 1980. After receiving his Masters, he proceeded to graduate with his Doctor of Medicine from the University of North Carolina at Chapel Hill where he went on to specialize in OBGYN. He studied his residency at the University of Indiana and then transferred back to Charlotte to start his own OBGYN practice, Carmel OBGYN in 1990. During his career in Charlotte, he built a successful practice as a doctor and surgeon. He pioneered many new techniques and procedures for pelvic floor surgeries and delivered thousands of babies across the Charlotte region. He was always on a constant quest for higher knowledge and was continuously looking to improve the quality of his patients’ lives. After retirement, Tommy joined the Charlotte Amateur Astronomers Club where he was awarded the title of Vice President of Programming. An avid Stargazer, he took a passion in building telescopes and bringing others of similar interest together. He was a dedicated golfer and member of Carmel Country Club, researcher, and amateur pilot with a love for aviation. In 2010 he met Carolyn on a blind date and they were married in December 2012. Over the course of his life Tommy was able to travel the world and most recently with Carolyn they explored his family’s country of origin Greece, as well as several other continents and most notably Africa which he loved. From the beginning they built a relationship of love, friendship and trust and from that point on they were inseparable. In addition to his parents, his survivors include his wife, Carolyn Williams Megremis; sons, Matthew (Julie) Megremis and Theodore (Jennifer) Megremis; and his beloved grandsons, Aiden and Jayce Megremis, all of Charlotte; the mother his children, June Megremis; his sisters, Vicki (Ned) Vaughn and Georgette (Ed) Galloway, all of Greensboro and by their children Katherine, Victoria and Darden; and by his beloved uncle Kimmon (Gwen) and their daughter Megan (Ryan) and their sons, as well as many cousins. The family asks that memorials be sent in Tommy’s memory to St. Nektarios Church which he deeply loved and was founding member. Arrangements are in the care of Heritage Funeral Home, Weddington Chapel. Please visit us at www.heritagecares.com for an online guest and condolence registry.

Dr. Megremis, 67 of Charlotte entered into the presence of God in the early morning of Saturday, May 8, 2021 after suffering a pulmonary embolism on Friday. Funeral services will be held at 11 am Wednesday, May 12 at St. Nektarios Greek Orthodox... View Obituary & Service Information

The family of Tommy Lampros Megremis M.D. created this Life Tributes page to make it easy to share your memories.

Dr. Megremis, 67 of Charlotte entered into the presence of God...