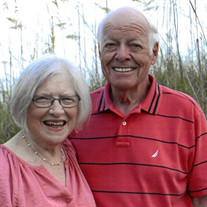 Virginia “Ginny” Cullen, of Mint Hill, NC, was welcomed into glory December 25, 2021 by her Heavenly Father and Dave, her husband of 66 yrs, who passed away 2 days before. Ginny was 91 years old. She was graciously blessed to able to live her last years with Dave at her side and children/grandchildren close by. Ginny was born October 14,1930 in Mercer, PA. She graduated from Muskingum College ’52 and was an elementary schoolteacher for 47 years. Most of those years were of service at Terre Haute Baptist School located in Terre Haute, IN. It was in teaching that she received much pleasure in training/nurturing young students for life. After retiring and moving to Charlotte in 2001, she was a substitute teacher at Covenant Day School up until the age of 82. She always stated that being around children is what kept her young. Her most valued job was raising her four children and, much to her delight, later spending time with her eight grandchildren. She enjoyed trips to Keating Summit, PA to spend time at their camp cottage with family to join in often. Tending her blueberry patch and perennial garden brought her much joy there. She was an avid cook with a perfected technique for baking blueberry pies and cinnamon rolls, which became one of the family “favorites”. She took pride in her craft of homemaking and keeping a tidy and well-organized home. She would laughingly state that cleaning and laundry were her hobbies. “I love to iron!”, you could hear her say. She would often reminisce of fond memories of trips to camp, a trip to NYC with her two daughters to celebrate her 70th birthday, special wedding anniversary celebrations, and numerous visits supporting her grandchildren’s endeavors. She could spend countless hours at a jigsaw puzzle, the Scrabble board, or a thoughtful game of Rummikub. One fond memory her grandchildren will cherish was the year she played a “cameo” role in a short family film as the “ticket agent”. She took pride in her grandchildren’s musical prowess and was their biggest fan. In her younger years, she shared her gifted soprano voice through many opportunities singing solos and in the choir at Bible BaptistChurch in Terre Haute, IN. She leaves behind four children and their spouses to cherish her memory, Tim (Tammy) Cullen of Fishers, IN. Tom (Diane) Cullen of Georgetown, IN. Tara (Ken)Dabbs of Mint Hill, NC, Tammy (Barry) Irvin of Mint Hill, NC and 8 grandchildren Nathaniel Cullen, Nick Dabbs, Andrew (Kayla) Cullen, Jonathan Dabbs, Jonathan Cullen, Meghann Cullen, Matthew Cullen, and Christina Cullen. Her life verse she would often recall is Proverbs 3:5-6 “Trust in the Lord with all your heart and lean not on your own understanding. In all your ways, acknowledge Him and He will direct your path.” She is preceded in death by her husband Dave. Her parents, Floyd & Mary Snyder, brothers Lester Dean Snyder, Rev. James R. Snyder, and Lyle Richard Snyder. A dual memorial service is scheduled for Wednesday, Dec. 29, 2021, 2:00pm at Christ Covenant Church, 800 Fullwood Ln, Matthews, NC. Visitation will precede the service at 1:00pm. Burial will be in the Historic Matthews Cemetery. Rev. Bruce Creswell will officiate. Heritage Funeral Home is handling the arrangements. The family wishes to extend their gratitude for the friendship, love, and support over the years of many friends from the Corem Deo Sunday School class at Christ Covenant Church and their community pastor Rev. Bruce Creswell. Also, we wish to acknowledge the team of thoughtful caregivers who showed much compassion and patience over the years in supporting us with her care. In lieu of flowers, memorial contributions may be made to: God's Adventure Camp, 1011 West Branch Fishing Creek Rd., Roulette, PA 16746 www.godsadventurecamp.com For those that are unable to attend the service in person, the service will be livestreamed by following this link: https://vimeo.com/660485222/d410d3feb9

Virginia &#8220;Ginny&#8221; Cullen, of Mint Hill, NC, was welcomed into glory December 25, 2021 by her Heavenly Father and Dave, her husband of 66 yrs, who passed away 2 days before. Ginny was 91 years old. She was graciously blessed to able... View Obituary & Service Information

The family of Virginia "Ginny" Cullen created this Life Tributes page to make it easy to share your memories.

Virginia “Ginny” Cullen, of Mint Hill, NC, was welcomed into...

Send flowers to the Cullen family.