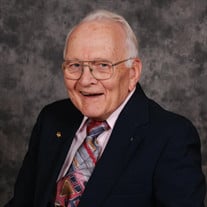 William (Bill) T. Sewing, age 91, peacefully passed away in his sleep on February 23, 2022 at home in Charlotte, NC. Bill was born in New York City on December 21, 1930. He left behind his 91-year-old beloved bride, Florence (Flo) Sewing. They were looking forward to celebrating their 70th wedding anniversary in May. Bill earned a bachelor’s degree from The Cooper Union in New York City and went on to earn a master’s degree from the University of Delaware. He had a fulfilling career as a civil engineer working for Dupont, where they had the opportunity to live in Holland for a year in the 1950’s. Bill and Flo left New York after they married and lived in Wilmington, Delaware where they had two children and Bill served on the school board. He was a veteran of the United States Army and a 32nd degree Mason. The Sewing family moved to Charlotte, North Carolina in the 1980’s. Bill and Flo were active members at Good Shepherd Presbyterian Church. In 1989 Bill suffered a stroke that had a lasting impact on his ability to communicate. However, he did not let that hold him back from experiencing life at its fullest. Bill took up ice skating after his stroke, competing in the senior class of figure skating at competitions across the country. Bill and Flo traveled the world with Bill bringing his skates in case an opportunity to skate arose. They loved to dance and were members of German, Swedish and various dance clubs. Fun-loving and enthusiastic, they enjoyed time with family and hosting parties for neighbors and friends. Bill is survived by his wife, Florence Hauger Sewing; daughter Louise and her husband, Mark Ferrell; son David and his wife, Elizabeth Sewing; and two grandchildren, Rose Sewing and Luke Sewing. Our dear Dad and Opa will be greatly missed. The family would like to express deepest gratitude to Mrs Susan Gianpetro for being such a devoted, excellent, long-term caregiver; to Mrs Tappie Dellinger for being Bill’s encouraging skating instructor; and to the late Miss Beverly Prevatte who generously helped with speech therapy. You each made such a big, positive impact on Bill’s quality of life and you are greatly appreciated! Friends and family are invited to join us in celebration of Bill’s life. Visitation will be held Friday, March 4, 2022 from 6 pm to 9pm at Heritage Funeral Home, 4431 Old Monroe Road, Indian Trail, NC 28079. A memorial service will be held Saturday, March 5, 2022 at 3 pm at Good Shepherd Presbyterian Church, 3307 Rea Road, Charlotte, NC 28226. A graveside service will follow at the Historic Matthews Cemetery, Pleasant Hill Drive, Matthews, NC 28105. Memorial gifts may be made to Loaves & Fishes/Friendship Trays, 648 Griffith Road, Charlotte, NC 29217, www.loaves and fishes.org. Bill and Flo enjoyed volunteering to deliver lunches for many years.

William (Bill) T. Sewing, age 91, peacefully passed away in his sleep on February 23, 2022 at home in Charlotte, NC. Bill was born in New York City on December 21, 1930. He left behind his 91-year-old beloved bride, Florence (Flo) Sewing. They... View Obituary & Service Information

The family of William (Bill) T. Sewing created this Life Tributes page to make it easy to share your memories.

Send flowers to the Sewing family.