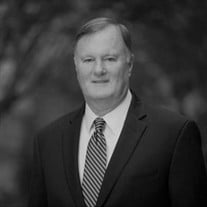 William Donald Brewer, Jr (Bill) died February 22, 2022 at the age of 73 in Charlotte, NC. Bill was born October 13, 1948 in Siler City, NC to Donald and Florence Brewer and had two brothers, Mike and David, both of Charlotte, NC. He was married on July 7, 1979 to the love of his life, Dannie Brewer, in Pinehurst, NC. They were blessed with two wonderful daughters, Dee Brewer and Emily Maxey, and their partners for life, Paula Kay and Joe Maxey, respectively. Bill graduated from Myers Park High School in Charlotte in 1966 and then from Wake Forest University in 1970 with a BA in Economics. After graduation from Wake Forest, Bill joined the US Air Force and was a navigator on a KC-135 stratotanker until he received his Honorable Discharge in 1975. He last served at Seymour Johnson AFB in Goldsboro, NC and spent three tours in the Far East during the Vietnam War. He received the Vietnam Service medal, the Air Combat medal, and the Air Medal with two Oak Leaf clusters. After the Air Force, Bill joined Wachovia Bank in 1975. He was with the bank until 2006 and retired as a Senior Vice President and Market President. He held positions in Raleigh, Wilmington, Goldsboro, Rocky Mount, Greenville and Greensboro then returned to Goldsboro for a second tenure before his retirement. He was retired for nine years before deciding to join WealthShield Partners in Cary, NC in 2016 as an Investment Advisor, a position he held until his death. In all the places he worked, he met and enjoyed so many people, many of whom remained his friends for life. During his life, Bill often said that he was fortunate to have such a wonderful family and great friends. Cousins and nieces and nephews abound, and he often said that he was so lucky to have been born into the family of Brewers. Relatives and friends from all walks of life made his earthly time so exceptional. His brothers were the best brothers anyone could have. They shared so much together throughout their lives. Friendships formed in college and throughout his life from playing golf, enjoying a game of cards, traveling and hunting made his life complete. He is survived by his lovely wife, Dannie and his family, Dee, Emily, Paula, and Joe. His two brothers and their wives, along with many of his cousins, nieces and nephews also survive him. Preceding him in death are his parents, and a very special cousin, Jimmy Brewer. The thing that he will miss most is time with all of them. These were his happiest times of his life. Bill will be celebrated at Walnut Creek Country Club in Goldsboro, NC on Monday, February 28, 2022 at 1pm. In lieu of flowers or condolences, the family welcomes memories and stories of times with Bill be sent to [email protected] or a donation may be made The First Tee or your local hospice. "Due to the family still observing Covid protocols, there will not be a visitation at the service. Masks will be provided and guests are asked to practice social distancing."

William Donald Brewer, Jr (Bill) died February 22, 2022 at the age of 73 in Charlotte, NC. Bill was born October 13, 1948 in Siler City, NC to Donald and Florence Brewer and had two brothers, Mike and David, both of Charlotte, NC. He was married... View Obituary & Service Information

The family of William Donald Brewer, Jr created this Life Tributes page to make it easy to share your memories.