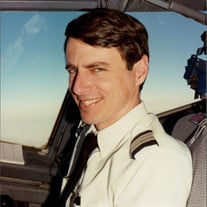 William B. Carruthers, Jr., 74, of Charlotte NC passed away peacefully at home November 18, 2019. He is survived by his wife Christine Carruthers of Charlotte, NC, sons William B. Carruthers, III (Dan Yang) of Cary, NC, Charles W. Carruthers of Charlotte, sister Susan Carruthers Fromkes (John) of Columbus, Ohio; aunts, cousins, nieces, nephews, and great-nephews. Bill is predeceased by his parents and sister Kathryn Maness. Born in 1945 in Philadelphia, PA to William B. Carruthers and wife Emily, he grew up in Atlanta, GA and Birmingham, AL. After graduating from Auburn University, Bill joined the Air Force and spent a year in Vietnam as a Forward Air Controller flying O-2As. There he earned three Distinguished Flying Crosses, Air Medals, and the Army Commendation Medal. Returning from Vietnam, Bill flew B-52s at Seymour Johnson AFB, where he met his wife Chris. They married in 1974 and after returning to civilian life they settled in Charlotte and started a family. Bill was a loving husband and caring father. He joined Piedmont Airlines/USAirways as a pilot, flying internationally until retiring due to Parkinsons. During this time Bill chose to honor those involved in the 1972 Battle of An Loc, creating the historical archive anloc.org. Always passionate about photography, Bill spent recent years capturing the beauty of nature and agility of hummingbirds, among other subjects. A celebration of Bill’s life will be held at 3:00 PM Saturday December 7, 2019 at Forest Lawn East Cemetery, 3700 Forest Lawn Drive, Matthews. Visitation will be held from 2-3 PM in the chapel of Heritage Funeral Home, Weddingtoon Chapel. Online condolences may be made at https://www.heritagecares.com In lieu of flowers, the family suggests memorial donations to the Special Olympics of North Carolina (https://sonc.net), Camp Blue Skies (https://www.campblueskies.org), Humane Society of Charlotte (https://humanesocietyofcharlotte.org), or a charity of your choice.

The family of William B. Carruthers created this Life Tributes page to make it easy to share your memories.

William B. Carruthers, Jr., 74, of Charlotte NC passed away peacefully...

Send flowers to the Carruthers family.