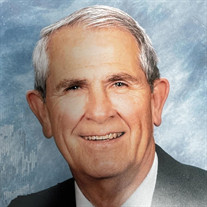 William David Ladd, 82, of Monroe passed into eternal life with our Lord and Savior on Wednesday January 19, 2022. Bill was born February 8, 1939 in Canton, Ohio the only son of David and Edna Ladd. He enjoyed a childhood full of outdoor adventure and sports as well as summers on the family farm. He graduated from Carnegie Institute of Technology (now Carnegie Mellon University) with a Bachelor of Science in Metallurgical Engineering. At Carnegie Tech, he met the love of his life, Joan B. Ladd. Together they shared 59 years of marriage, memories, and family. Beginning his professional career in 1962, Bill remained employed with the same company Teledyne (now Allegheny Technology Inc) in two locations – Latrobe, PA (Vasco) for 20 years and Monroe, NC (Allvac) for 21 years. He worked in the steel mills during college and his professional career spanned positions from Plant Engineer to Vice President of Quality. In addition to his loving wife Joan, Bill is survived by sons David (Kathryn) of Monroe and Stephen of Charlotte, and daughter Lisa Bailey (Jeff) of Virginia Beach, VA and six grandchildren – Rebecca George (Elliot), Victoria Ladd, William Ladd, and Cameron, Tanner and Erin Bailey. He is also survived by his brother-in-law, James Balent (Gail) of Washington, PA. He was preceded in death by his sister, Barbara Nicholson of Miamisburg, OH. He believed in service above self and was a faithful member of the First Presbyterian Church (Man of the Year 2020-21), the Monroe Breakfast Rotary Club (past President and Rotarian of the Year 1992-93), as well as many other organizations. Bill enjoyed life and all it had to offer and always lived with a focus on his wife, family and His Lord. He introduced his children and grandchildren to the beauty of the United States through cross-country travel to many varied destinations. He began each day with purpose and a cup of coffee. He believed in hard work and living honestly. School events, games and recitals were events he never missed for his grandchildren who were so dear to his heart and the joy of his life. A good joke and story were always on the tip of his tongue, and he was never short on words. We are all richer and blessed for having Bill in our lives, and we will miss him dearly. Family will welcome friends to a Celebration of Life on Saturday February 19th at First Presbyterian Church, Monroe. The family will receive friends 1:30 – 2:45 pm prior to the service at 3:00 pm. Memorial donations can be made to: First Presbyterian Church, 302 E Windsor St, Monroe, NC 28112 or Hospice & Palliative Care, PO Box 470408 Charlotte, NC 28247.

William David Ladd, 82, of Monroe passed into eternal life with our Lord and Savior on Wednesday January 19, 2022. Bill was born February 8, 1939 in Canton, Ohio the only son of David and Edna Ladd. He enjoyed a childhood full of outdoor... View Obituary & Service Information

The family of William David Ladd created this Life Tributes page to make it easy to share your memories.

William David Ladd, 82, of Monroe passed into eternal life with...

Send flowers to the Ladd family.