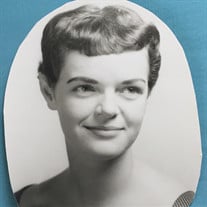 Wilma DeHart Nance died peacefully at home April 9, 2022. She was born December 23, 1937 in Lincolnton, NC, the daughter of James and Cora (Hunnicutt) DeHart. Wilma graduated from Lincolnton High School in 1956. She worked for thirty years selling furniture at several companies in Charlotte, including Wickes, Havertys, Premier, and Lazyboy. Her honesty and trustworthiness allowed her to excel in sales, consistently holding the title of top salesperson wherever she went. She was a collector of many things. Wilma had a special love for dolls and vintage toys. She has acquired a magnificent doll collection throughout the years, with a special love for Raggedy Ann, Barbie, Madame Alexander, and American Girl. She also has a nice collection of antique tin litho tea sets and watering cans. In her spare time, Wilma bought and sold many treasures. In her early years, she enjoyed setting up at the flea market. She then advanced to selling in antique malls, the two most significant being Crow’s Nest and Golden Girls. Her booths were always aesthetically pleasing, showcasing her natural knack for decorating. Later in life she enjoyed selling on EBAY with the help of her son, and more recently her daughter. In addition to her parents, Wilma was predeceased by two brothers, Harold and Kenneth, and a daughter, Lisa. Surviving is her son, Richard Nance, of Stallings; her daughter Susan LaMarre and her husband, John, of Gold Hill, NC; son Patrick Nance and his wife Heather, of Mount Pleasant, NC; seven grandchildren, Cassidy Helms, Jordan Wolchesky, Lucas DeHart, Lyndsey Potter, Samantha Wolchesky, Seth LaMarre, and Riley Nance; and one sister, Ellen Styron. “Only that day dawns to which we are awake” - Henry David Thoreau A service of remembrance will be held at a time and place to be announced.

The family of Wilma DeHart Nance created this Life Tributes page to make it easy to share your memories.