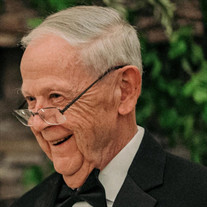 This service will be live streamed beginning at 12:55 p.m. --- Click on the link below with the arrow and you will be directed to the Chapel Alfred (Al) Glaze Smith, III of Charlotte, NC passed away on February 21st with his wife by his side after a short battle with pneumonia. He was 84. Al was born in Manhattan on June 30th, 1937 to Katharine Cushing Brown and Alfred Glaze Smith, Jr. He grew up outside of Columbia SC, working and developing his hard work ethic on the family peach farm. Al graduated from Columbia University and went on to receive his Masters of Arts in Economics from George Washington University. Al was accepted into Officer Candidate School in 1960 and served in the US Navy from 1959 to 1966 ending his naval career as Lieutenant. He then began his career at North Carolina National Bank, which became NationsBank then later Bank of America, in Charlotte, North Carolina. He retired as the Chief Economist in 1997. Throughout the years he was an avid hunter and open water fisherman, enjoying his family home and boat, the Fly n’ Fish, in Ocracoke NC. Al even obtained his pilot's license to shorten the trip. He enjoyed his retirement by traveling with his wife and youngest daughter, frequently visiting tropical locations where fishing and deep sea diving opportunities were plentiful. Al was survived by his wife Alison, sons David (Kathy) of Virginia Beach, VA, Brian (Tonya) of Lancaster, SC, daughters Lynne of Charlotte, NC, Laura (George) of Travelers Rest, SC, Drew (Tom) of Lincolnton, NC, brother Roy (Rebecca) of Lexington, SC, 8 grandchildren with another on the way, 3 great grandchildren, and loyal yellow lab Stella. He was preceded in death by his sons Mark and Michael, many labs and golden retrievers over the years, and most recently his chocolate lab Charlie, who he could frequently be seen taking for walks around the neighborhood. Al was an avid runner and either ran or lifted weights daily until the end of his time with us. Funeral arrangements will be held on Saturday, February 26th at Heritage Funeral Home at 3700 Forest Lawn Dr., Matthews, NC 28104. Visitation will start at 12 with service at 1. A graveside service for all will follow across the street at Forest Lawn East Cemetery. In lieu of flowers, please consider a donation to Al’s preferred charity, Crisis Assistance Ministry of Charlotte.

This service will be live streamed beginning at 12:55 p.m. --- Click on the link below with the arrow and you will be directed to the Chapel Alfred (Al) Glaze Smith, III of Charlotte, NC passed away on February 21st with his wife by his side... View Obituary & Service Information

The family of Alfred (Al) Glaze Smith III created this Life Tributes page to make it easy to share your memories.

Send flowers to the Smith family.