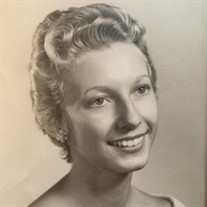 Our beloved Bette Wilson McClain, born March 2, 1940, entered her eternal home on January 29. We rejoice that she is in the arms of Jesus, her Savior. She died peacefully at home, surrounded by her family, after courageously battling heart failure. She is predeceased by her mother and father (Albert and Pearl Wilson), and her brother (Albert Wilson). Bette was born in Burnsville, NC, later moving to Asheville. She graduated from Berea College, majoring in home economics. She excelled in everything she did and it’s no surprise that the college dean said of her, “In everything she has done here, she’s always a lady.” Bette met and married the devoted love of her life, Henry, and they would be celebrating 60 years of marriage this July. He loved to tease her and called her “Lightning”, as her southern charm and manners didn’t always equate with swiftness! Their love and commitment have been a beacon of light and example to so many, particularly their children and grandchildren. Bette and Henry later moved to Fort Myers, Florida and enjoyed many years of sailing before moving to Charlotte to be near their extended family. Bette had an unwavering faith in God and was marked by grace, wisdom, and gentleness to all. Despite years of chronic pain, complaining was simply not an option for her, as her response was always, “others have it worse than I do”. She was active in church her entire life teaching Sunday school and many women’s Bible studies. She had such a gift of listening, particularly in mentoring young married women in their faith. They were drawn to her peaceful heart and wisdom and flocked to her for advice and counsel. Bette’s greatest joy was her family. Her children and grandchildren adored her. She frequently checked in with them, asking how she could be praying for them thereby nurturing deep relationships with them all. Bette is survived by her loving husband, Charles Henry McClain, daughters Karen McClain Cauthen (Charles), and Kelly McClain Dockery (Mike), grandchildren Julia Cauthen Williams (Hampton), McClain Cauthen, Frances Cauthen, Matthew Dockery (Holly), John Dockery, Sarah Dockery, and great grandson Henry Lake Williams. The family would like to express their deepest thanks to Hospice of Charlotte and Aldersgate at Home for their incredible care given to Bette. Renee and Hollie, you became and are like family to us. A service to celebrate Bette’s life and Homecoming will be Saturday, Feb 5 at Christ Covenant Church, 800 Fullwood Lane, Matthews, NC at 11 am, officiated by Reverends Bernie Lawrence and Tom Groelsema. Funeral arrangements are through Heritage Funeral Home. The family will receive friends prior to the service beginning at 10 am in the main foyer. A private family burial will be after the service. Memorials in Bette’s honor may be given to Christ Covenant Church at address above.

Our beloved Bette Wilson McClain, born March 2, 1940, entered her eternal home on January 29. We rejoice that she is in the arms of Jesus, her Savior. She died peacefully at home, surrounded by her family, after courageously battling heart failure.... View Obituary & Service Information

The family of Bette W McClain created this Life Tributes page to make it easy to share your memories.

Send flowers to the McClain family.