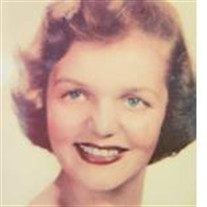 Betty Sue Fryar Hardee passed away on Tuesday, December 14, 2021. She was born on July 29,1935 in Dunn, North Carolina to Nan and Morris Fredrick Fryar. Sue spent most of her childhood in Salisbury and on the family farm in Tennessee. In the mid 60’s, Sue moved to Charlotte where she met Bo Hardee, her husband of 56 years. They were married in Myrtle Beach but settled in Charlotte, NC, where she began a lifelong career with Myers Park Country Club in the business department. Sue’s strong aptitude for numbers and budgeting soon moved her to the position of Club Controller where she worked until her retirement. Throughout her years in Charlotte, Sue was involved in numerous garden clubs and bridge groups. An avid tennis player, Sue could often be found on the neighborhood tennis courts at Starclaire and Cedar Forest Racquet Club. She always made time to watch Wimbledon and the US Open, forever pulling for Federer if he was playing. Sue and Bo lived for many years in the Matthews area of Charlotte where they raised four children. The 4th of July neighborhood parades always brought Sue great joy as this was her favorite holiday of all. She was a longtime member of Providence Presbyterian Church. Sue and Bo loved to dance and travel to North Myrtle Beach for SOS. Sue was happiest doing the Boogie Walk and Belly Roll alongside Bo and her many friends at Groucho's to the sounds of Chairman of the Board and The Drifters. Later in life, Sue and Bo moved permanently to Myrtle Beach, SC. She could often be heard saying to the grandchildren “Everything is better at the beach!”. Sue is survived by her husband A.K. (Bo) Hardee, III and her children Bonnie Dreifuss of Orange CT, Steve Eagle (Carter) of Savannah, Georgia, Kirk Hardee (Shelly) of Waxhaw, NC and Martha Ellen Hardee of Myrtle Beach, SC. She is also survived by five loving grandchildren, Kristin Dreifuss, Averil Eagle Brannen (David), Tucker Eagle (Stacy), Ridge Hardee and Lydia Hardee. Sue is also survived by her great grandson Charlie Brannen. Services for Sue will be held on Thursday, December 23 at 1:30 at Providence Presbyterian Church located at 10140 Providence Church Lane, Charlotte, NC 28277. In lieu of flowers, memorial donations may be made to Providence Presbyterian Church.

Betty Sue Fryar Hardee passed away on Tuesday, December 14, 2021. She was born on July 29,1935 in Dunn, North Carolina to Nan and Morris Fredrick Fryar. Sue spent most of her childhood in Salisbury and on the family farm in Tennessee. In the... View Obituary & Service Information

The family of Betty Sue Fryar Hardee created this Life Tributes page to make it easy to share your memories.

Send flowers to the Hardee family.