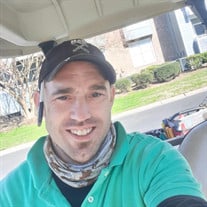 On Tuesday, February 8th, 2022 Brandon “Bam-Bam” Roberts left this world to be with our Lord and savior. Born in Charlotte, North Carolina on May 10th, 1982 to his loving mother Tammy Roberts-Ross. Brandon attended Independence high school before continuing his education at South piedmont community college where he was working to become a police officer. In Brandon’s spare time you could find him doing many different things whether he’s playing basketball with friends or working on the next challenge in his favorite video game. He was passionate about music and was an avid watcher of all the best horror movies, But there is one thing that Brandon loved above all else and that is his family doing everything he can to be the best father, brother, and son that he could be. Brandon is proceeded in Death by his grandparents Louann McMullan and Worth C Seate. His memory will be carried on by those who love him the most his mother Tammy Roberts-Ross, his sisters Anna Roberts and her husband Kenneth Hopper, Josie Ross, Amber Cox, and Heaven McClain, His Brother Jamie Roberts, His children Mason Roberts, Brianna Blackmon, and Mckenzie Roberts, Robert is also survived by six nephews Aiden Bryce Ross Thurman, Cohen Seate, Ryder Reynolds, Aaron Roberts, Brendan Hopper, and Corbin Hopper, as well as six nieces, Piper Hopper, Kendra Hopper, Faith Hopper, Carter Hopper, Charlie Hopper, and Rileigh Kuntz, He leaves behind his loyal pups, Lady and Rambo. Brandon Roberts will always be remembered as a Great father, Caring Brother, and an amazing son.

On Tuesday, February 8th, 2022 Brandon &#8220;Bam-Bam&#8221; Roberts left this world to be with our Lord and savior. Born in Charlotte, North Carolina on May 10th, 1982 to his loving mother Tammy Roberts-Ross. Brandon attended Independence high... View Obituary & Service Information

The family of Brandon Roberts created this Life Tributes page to make it easy to share your memories.

Send flowers to the Roberts family.