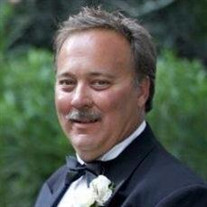 On December 5, 2016, Charles L. Thornton (Charlie), age 50, departed this earthly world surrounded by his family in Charlotte, North Carolina. Born in Charleston, West Virginia, he was the devoted son of Douglas L. and Phyllis M. Thornton of St. Albans, WV. He graduated from St. Albans High School and attended Marshall University. He was employed at Titan Land Group, LLC as Senior Vice President of Field Projects. Charlie was preceded in death by his daughter, Rana-Michelle Lee Thornton. He is survived by his wife of 28 years, Lisa R. Thornton, his son Charles L. Thornton II (CJ) of Charlotte, his daughter Kristen Thornton-Kiger (Kri) and her husband Douglas Kiger and his two grandchildren, of Fort Mill, SC; his sister, Kelli D. & brother-in-law Mark Puhnaty of Hoover, Al., his in-laws Lionel & Dolores L White of Palm Coast, Fl., his brother and sister-in-law of Part City Utah and a host of nieces, nephews, friends and family. A viewing will be held on Sunday, December 11, 2016 from 6:00 to 8:00 pm at Heritage Funeral Home, 3700 Forest Lawn Drive, Matthews, NC. Services will be held at St. Matthews Catholic Church, 8015 Ballantyne Commons Parkway, Charlotte, NC on Monday, December 12, 2016 with visitation at 12:00 pm. The funeral service will directly follow at 1:00 pm. Charlie was honored as a local hero for his service as a Recovery Responder to the 9/11 attacks in NYC, providing restoration for eight consecutive months. He enjoyed fishing, going to the pool, attending races, panther games and golf outings with his son CJ. When he wasn’t spending time with his family, he might be found sitting outside in his fold-out chair with a cup of coffee enjoying all of God’s creations. He loved owning and operating a heavy civil utility co for over 20years, and passing all he knew to the next generation. He took great joy in teaching his grandchildren Brooks (3) and Jaden (1) about construction vehicles and sail boats. He was always available for his daughter Kristen and never missed an opportunity to tell her how proud he was of her. He was known as someone who gave generously to anyone who needed it. There were no strangers in Charlie’s world. Everyone was a friend. Charlie enjoyed traveling with his wife Lisa and most recently he fulfilled a dream of sailing together in St Thomas. He was the pillar of the family and he will be dearly missed. In the words of his grandson Brooks, “we’re celebrating because Papa is with Jesus.” In lieu of flowers, the family asks that you donate to Teen Reach, the couple’s non-profit organization at: www.TeenReach.Us or make a memorial contribution to the funeral home to provide Thumbie Prints for the family, a treasured gift they can keep forever.

The family of Charles Lee "Charlie" Thornton created this Life Tributes page to make it easy to share your memories.

Send flowers to the Thornton family.